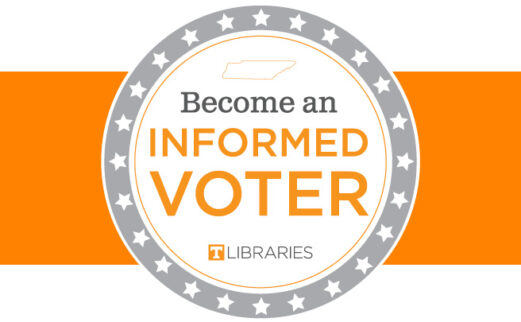 In past national elections, young people — especially college students — have had some of the lowest voter participation rates of any age group. By all accounts, the 2020 election has broken the mold!

The Center for Information and Research on Civic Learning and Engagement (CIRCLE) at Tufts University reports that youth turnout was much higher in the 2020 presidential election than in 2016. CIRCLE’s calculations, based on votes counted as of November 6, suggest that 49%–51% of voting-eligible young people, ages 18–29, cast a ballot in the 2020 election. CIRCLE projects that, when all the votes are counted, youth turnout could rise to 53%–56%.

The University of Tennessee and the UT Libraries also mounted efforts to mobilize the student vote. A Vols Vote coalition, led by librarian Donna Braquet, launched an extensive voter education project. They created a website with voting information (visited by almost 2,500 potential voters) and provided students with regular encouragement and reminders. Leading up to the election, Braquet held weekly “How to Vote” workshops and screened weekly documentary films on topics  such as women’s suffrage, voter suppression, and the fight for voting rights. The Howard H. Baker Jr. Center for Public Policy on the university campus hosted candidate forums and served as a conveniently-located early voting site. More than 1,000 voters a day cast their ballots at the on-campus polling site. Following voting day, the Office of the Dean of Students facilitated an open dialogue on the election as part of its discussion series on challenging and timely campus topics.

Braquet and the libraries’ voter education task force actually devoted months to student voter outreach. Ahead of the presidential primary this past March, the task force conducted a voter registration drive that added nearly 300 students to the voter rolls. Leading up to the voter registration deadline, the public service desks at each of our libraries (Hodges, Pendergrass, and DeVine) maintained a voter education station with information on voting, registration forms, and a deposit box for completed forms. Members of the task force collected forms each week and delivered them by hand to the Knox County Election Commission downtown. During Knox County’s early voting period, the task force hosted a “Ride the Trolley to the Polls” field trip.

It’s been an encouraging election season for anyone who would like to see a rise in citizen participation in US elections.

A record number of young people volunteered to serve as poll workers this year. Traditionally, a significant percentage of poll workers are older (typically retired) individuals — the very demographic that is especially vulnerable to COVID-19. This election season a new generation of engaged citizens valiantly stepped up to staff the polls.