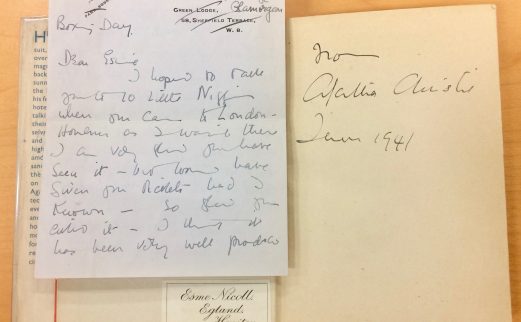 This year marks the 100th anniversary of Hercule Poirot’s debut for an English audience. His first British appearance in The Mysterious Affair at Styles, by beloved mystery novelist Agatha Christie (1890-1976), appeared in 1921, and Betsey B. Creekmore Special Collections and University Archives holds a copy of this landmark novel. Our copy is distinguished by having belonged to Christie’s mother, Clarissa Miller, and bears a simple inscription from Christie. This gem sits well alongside our other Christie first editions, all of which came to us in 2011 as a generous donation from legendary crime novelist and researcher Patricia Cornwell. Other interesting Christie items in our collection include a typescript with manuscript corrections of Christie’s The Pale Horse (1961), and more signed first editions such as Evil Under the Sun (1941), containing personal correspondence to Christie’s friend Esme Nicolle.