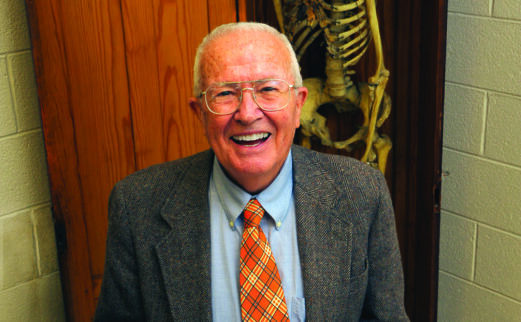 Bass generously donated his collection of research and teaching material to the Libraries in 2013 to be preserved, housed, and made available for study within the Special Collections reading room. The Dr. William M. Bass III Collection documents his teaching and research career, covering Bass’s more than 50 years as a professor and researcher.

Creator of the “Body Farm”

Bass is the creator of the “Body Farm” — as well known to the general public and to readers of crime novels as to the scientific community. The Body Farm (officially the Forensic Anthropology Center) was the world’s first laboratory for conducting decomposition research. On a two-acre compound in Knoxville, Tennessee, donated human remains are left to decay in various natural and controlled environments, allowing researchers to study the processes and timetable of decomposition. While sometimes seen as macabre, Bass’s devotion to studying human decomposition has directly benefited both law enforcement and the forensic anthropology community. Techniques for identifying human remains and for determining cause and time of death, perfected by Bass and his students at the Anthropological Research Facility, were helping solve criminal cases well before DNA profiling became a commonplace in courtrooms.

Those forensic techniques have helped solve some imaginary cases as well. Bass and co-author Jon Jefferson, writing under the pseudonym Jefferson Bass, have to date published eight “Body Farm” novels that draw on the professor’s real-life expertise to solve fictional crimes.

Over the course of his career, Bass worked for the Smithsonian Institution in Washington, D.C., cataloging the bones of Native Americans, and participated in several summers of fieldwork excavating human skeletal remains in the Midwest. He served as the physical anthropologist for the River Basin Surveys in South Dakota, conducted by the University of Kansas and the Smithsonian through the Interagency Archeological Salvage Program, from 1956 to 1959. Prior to arriving in Tennessee, Bass taught at the University of Nebraska and the University of Kansas.

The Dr. William M. Bass III Collection includes Bass’s class notes and lectures; personal and professional correspondence; field study research notes; publications; and teaching and departmental material. Another significant part of the collection is Bass’s research material that includes his original field study notebooks describing in detail his work as field director for expeditions in the Central and Northern Plains area funded by the National Science Foundation and National Geographic Society. These field notes describe excavated artifacts and skeletal remains that were identified, cataloged and housed in the teaching collection within the Forensic Anthropology Center.

The University Libraries has digitized these field notes and is making them available online. Students and researchers worldwide can now have a comprehensive look at the primary source documentation from Bass’s fieldwork. Through Bass’s donation, researchers will now be able to access the physical and digital documents that illustrate how Bass and his research have forever changed the field of forensic anthropology.

Adapted from the 2013-2014 Library Development Review