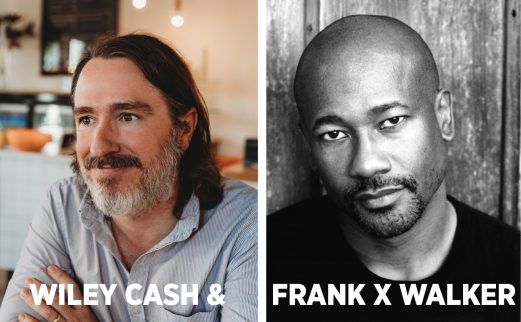 Writing from a Sense of Place / Writing from the Frontlines of the Pandemic
by Martha Rudolph
March 31, 2021  •  10 minute read

Even if you’re indifferent to poetry, that opening stanza is going to grab your attention. Even scoffers are going to sit up and take notice.

“Mrs. Butterworth, Uncle Ben & Aunt Jemima” is one of the poems Frank X Walker read to the audience at the recent Wilma Dykeman Stokely Memorial Lecture, March 9th, sponsored by the John C. Hodges Society of the University of Tennessee Libraries and the Friends of the Knox County Public Library.

Walker, a professor of English at the University of Kentucky and the first African American to hold the position of Poet Laureate of Kentucky, was sharing the virtual stage with novelist Wiley Cash.

“The poem about Aunt Jemima and Mrs. Butterworth and Uncle Ben started off like a joke. But, man, it’s not one bit funny,” Cash commented. “You give us permission to laugh. And then as soon as we laugh, we feel bad; we feel guilty.”

Walker read several poems from his newest collection, Masked Man, Black: Pandemic and Protest Poems (a title inspired by Paul Laurence Dunbar’s poem “We Wear the Mask”). The book gathers poems Walker began writing last year, while sheltering in place and — like all of us — dealing with the dual pandemics of COVID-19 and racial unrest. “I posted them every day on Facebook for the whole month of April — a very early raw form of everything I wrote … I knew other people were suffering too, and I wanted to give people an outlet, to have some point to talk about it and to see what other people are experiencing. … It’s almost like a documentary.”

Walker tried to find something positive in the experience of the pandemic. “It’s a really difficult place to look for something that qualifies as a silver lining.” But after being sequestered at home, “I found myself with this unexpected bounty of extra time to read more and to write more. … And the most positive thing that happened for our family was we started gardening.”

Cash, too, found a silver lining in sheltering in place: “I’m a full-time writer. But what that means is: I teach, I edit manuscripts, I do workshops, I travel for readings … I do a whole bunch of things to sustain my writing. … I don’t punch a time clock to go in at nine and get off at five. I wish I did. But the pandemic allowed me to do that.”

Cash read excerpts from two of his novels — first, from The Last Ballad. Set in Gaston County, North Carolina, where Cash grew up, The Last Ballad recounts the struggle of the labor movement in early twentieth-century America through the story of mill worker Ella Mae Wiggins.

“I’m the kind of person that feels a deep connection to region,” Cash said. But Cash did not always write from a sense of place. “When I left North Carolina in 2003, I went down to Louisiana to study under a writer named Ernest Gaines, who has had a tremendous effect on my writing — probably more so than any other writer that I can think of. And I wanted to study with Ernest Gaines because he was someone who so represented the region he called home, which is southwest Louisiana. …I learned one very important thing from Ernest Gaines: I learned that the place you are from is worth literature. The experiences that you have had are worth writing about. And where I teach, at UNC Asheville as writer-in-residence, that’s something that I’m always stressing to my students: Your lives are worth literature. Your stories are worth the page. You have had experiences that will resonate with someone beyond your immediate experience, beyond your immediate family or friend group. And I learned that from Ernest Gaines. … When I moved down to southwest Louisiana, I found out that I couldn’t shake North Carolina.” Cash’s first three novels — each set in western North Carolina — have all been multiple award-winners.

Cash read from the opening chapter of his forthcoming novel — this one set in coastal North Carolina — and explained the genesis of his latest work.

“It dawned on me that my children are growing up on the coast of North Carolina. And it is a landscape, it is a culture, it is a pattern of weather, it is a geography that is, has been, and I imagine will continue to remain very foreign to me. And I constantly find myself trying to make sense of this place. And I have a bit of anxiety in my darkest moments that my daughters’ experience of growing up here is going to be so different from my own experience of growing up west of here, that there is going to be some kind of irrevocable difference in our understanding of the world. …

“And so I thought maybe I should write about this part of the state. And maybe I should write about eastern North Carolina’s history, especially the racial legacy of a place like Wilmington, Brunswick County, New Hanover County — the site of the only successful coup in American history, in 1898, when a race massacre overturned a local elected government … site of the Wilmington Ten, one of the great injustices of the civil rights movement. And so my new novel, which comes out in September, titled When Ghosts Come Home … It’s a coastal novel. And this novel is my attempt to make sense of this place.”

Before visiting with writers Wiley Cash and Frank X Walker, the evening had begun with presentation of a University of Tennessee Accomplished Alumni Award to UT alum and long-time library supporter Cindy Wyrick, currently United States Magistrate Judge in the Eastern District of Tennessee. Dean of Libraries Steve Smith and Doug Blaze, Interim Dean of the College of Law, both gave testimonials on her behalf. The evening ended with Natalie Smith, president-elect of the Friends of the Knox County Public Library, and Linda Lee, chair of the John C. Hodges Society of the UT Libraries, inviting the audience to support both libraries through monetary gifts and through engagement with programs such as the Wilma Dykeman Stokely Memorial Lecture.

The lecture honors the late Wilma Dykeman Stokely (1920–2006), writer, speaker, teacher, historian, environmentalist, and long-time friend of the Knox County Public Library. Her papers are part of the Betsey B. Creekmore Special Collections and Archives at the University of Tennessee Libraries.