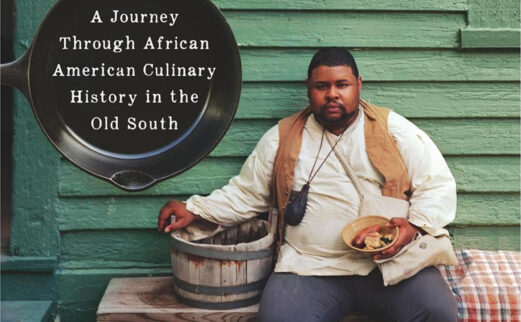 Culinary and cultural historian Michael W. Twitty will present the 2020 Wilma Dykeman Stokely Memorial Lecture at The Press Room on Tuesday, February 11, at 7 p.m. Copies of his award-winning book, The Cooking Gene: A Journey Through African American Culinary History in the Old South, will be available for purchase.

The Press Room is located at 730 N. Broadway. On-site parking will be available. The UT Libraries is one of several sponsors* of the event, which is free and open to the public.

Twitty is also the creator of Afroculinaria, an award-winning blog that explores the culinary traditions of Africa, African America, and the African diaspora. His interests include food culture, food history, Jewish cultural issues, African-American history, and cultural politics.

The Cooking Gene: A Journey Through African American Culinary History in the Old South chronicles Twitty’s travels through the former slaveholding states as he rediscovers the African roots of Southern cooking and traces his own ancestry. In 2018, the James Beard Foundation named The Cooking Gene both Book of the Year and an Award Winner in Writing.

One of Twitty’s objectives in The Cooking Gene is to restore the rightful place of enslaved Africans and their descendants in the culinary history of America. In plantation kitchens, enslaved Africans blended ingredients and cooking traditions brought from their homelands with European and Native American culinary practices. From colonial times forward, cooks of African descent have profoundly influenced American — and especially Southern — cuisine.

But Twitty’s project is more ambitious than a mere revision of culinary history: he aims to restore “cultural and spiritual reconnection . . . and creative and cultural capital to the people who . . . have historically been suppressed from benefiting from their ancestral legacy.”

As he expressed it in The Cooking Gene,

Everything black folks gave to the aristocracy . . . became spun gold in the hands of others — from banjos to barbecue to Elvis to rice and cotton know-how.

THE COOKING GENE IS PART TRAVELOGUE, part culinary history, part genealogy, and in part a history of slavery in America. Twitty details the waves of transatlantic trade in enslaved Africans brought here to cultivate, first, tobacco and then cotton. Some 400,000 people endured the Middle Passage from Africa to America. After the transatlantic trade was outlawed in 1808, a domestic trade in human beings continued unabated — and even accelerated after the Indian Removals of the 1830s opened new lands in the west.

In 2011, Twitty began a journey of self-discovery that he called the Southern Discomfort Tour. He determined to visit “all the spots and stops that led to me — crumbling kitchens, rotting auction blocks, graveyards iced in asphalt. . . . I began to have the urge to see the places, imagine the ancestors whose lives I could barely know otherwise, and taste the food.”

He crisscrossed the South from Maryland to Louisiana, following the westward spread of cotton production in antebellum America and the forced migrations of his enslaved ancestors. Along the way he discovered that his forebears included white slaveholders as well as enslaved Africans. With DNA testing and the help of a genealogist specializing in African-American ancestry, he charted his genetic profile and a family tree going back two centuries.

RESEARCHING ONE’S AFRICAN AMERICAN ANCESTRY is especially fraught. Slave schedules list no names — only the genders and estimated ages of the slaveholder’s chattel. Antebellum census records are even more dehumanizing, as Twitty discovered in his earliest efforts, at age twelve, to trace his own roots: “At the end of the day, I went home with a scribble of a census record that did not separate humans from animals. Horses, cows, Negroes.”

For two years, Twitty worked with a researcher who specializes in black genealogy. “Toni [Toni Carrier of Lowcountry Africana] helped me to unravel the families of my four grandparents, drawing on my uncle’s previous research and my research, and creating new leads by looking into every conceivable document and source, from Freedmen’s Bureau records to Civil War records, newspaper ads, census data, cohabitation records, oral histories with my family members, wills, probate records, and land deeds.”

For the purposes of tracing his genealogy, it was fortunate that, after emancipation, Twitty’s ancestors took the names of their slaveholders. Furthermore, his family treasured and passed down as family lore whatever names and memories had survived. “When you have the names,” Twitty says, “you can dig further because enslaved people were property — they were valuable, and as such their value was often cause to record them in the backs of Bibles, in tax records, in plantation journals and business ledgers.”

That cruel irony led to a breakthrough in his genealogical research: “After months of careful research [Ms. Carrier’s] first major discovery was the earliest record of my great-great-great grandmother Hester/Hettie, found in the will of her mistress . . . That one record took half a year to find.”

Twitty’s book is interspersed with imagined scenes from his ancestors’ lives: his great-great-grandmother watching as her child is sold away from her, never to be seen again . . .

TRAVELING AROUND THE OLD SOUTH, Twitty encountered plenty of evidence of an abiding nostalgia for the Confederacy: statues of Confederate generals in the town square, apartment complexes and resorts that bear the names of nearby plantations. “All around us the Confederate cause is celebrated and revived.”

But, he reminds us, “The early and antebellum South is not where most African Americans want to let their minds and feet visit. It’s a painful place . . . ” Plantation mansions are lovingly preserved, but the graves of the enslaved are unmarked and unkempt. “It is no wonder many African Americans do not flock to but altogether avoid the plantation and urban sites where enslaved people — our ancestors — lived, worked, and died.”

Nonetheless, Twitty states, “I dare to believe all Southerners are a family. . . . We are a dysfunctional family, but we are a family.”

IN ADDITION TO BEING A CULINARY HISTORIAN, Twitty is an historical cook — a self-proclaimed “antebellum chef” who brings to life the foodways of a bygone era. In 2017, as Colonial Williamsburg’s first Revolutionary in Residence, he helped to interpret 18th-century cooking traditions for visitors to the living-history museum.

Twitty spent a decade learning the cooking traditions of an earlier era. “There is magic in being able to take the hot coals and shovel them above and below and cook something and break the expectations of the people you cook for. Equally powerful is imagining that 23-course meals were once made using only fire, iron, copper, wood, flint, clay, and pewter.”

“I would have to learn to maneuver the cooking utensils of old and learn how to keep time as I cooked.” “Some enslaved cooks timed the cooking by the stanzas of the hymns and spirituals, or little folk songs that began across the Atlantic. . . .” Such as this anthem of resistance quoted by Twitty:

Twitty, who is a convert to Judaism, says that Passover is his favorite holiday. “Why not? I am the descendant of enslaved people. I take this holiday personally. . . . The Haggadah states, ‘Now we are slaves …’ Every day I suit up and go out to the plantation kitchens and cook like our ancestors, I live that phrase. I am not enslaved, but by showing the living what the dead went through, I live a scary and unsettling past. I feel like a doorway for all the spirits of the plantations I visit.”

THROUGH LECTURES AND DEMONSTRATIONS, and through afroculinaria.com, his blog devoted to the culinary traditions of Africa, the African diaspora, and the American South, Twitty is rewriting the history of American food.