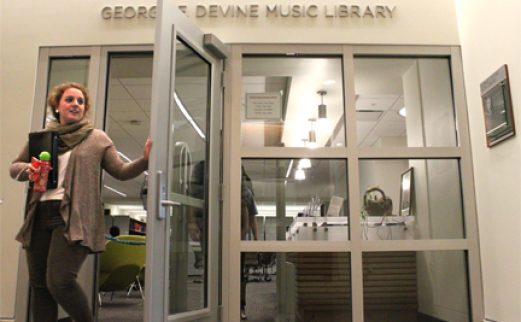 The metaphor of the tree implied by the term branch library seems apt when speaking of the George F. DeVine Music Library. The firmly rooted trunk sustains the branch but is nourished, in turn, by each shoot and sprig. A branch library with a very small footprint, the Music Library nonetheless has a proud history of advancing the mission of the University Libraries. Those sprigs, of course, are actually the generations of students and faculty members who have benefited from the work done in the Music Library and have, in turn, enhanced the prestige of the University of Tennessee and its libraries.

The Role of Music at the University of Tennessee

Music has undoubtedly been played, studied, and collected at UT since the school’s founding. But the exact history of formal music pedagogy at the university and the collection of music materials to support that curriculum are difficult to document.

The Pride of the Southland Band traces its origins to 1869, when Gustav Knabe began his 20-year tenure as director of the university’s military cadet marching band. Music instruction outside the military program began in 1902 with inauguration of the Summer School of the South, a Chautauqua-style institute that offered music education as part of an eclectic program of continuing education for schoolteachers. Although highly successful during its brief existence, the Summer School of the South closed after the 1918 session.

Calls for a department of fine arts that would include the study of music intensified in the 1930s. But in fact the first music faculty with academic status were appointed by the College of Education in 1946. Soon thereafter, though, in 1947, the university and the Knoxville Symphony Orchestra (KSO) jointly hired the composer, conductor, and flutist David Van Vactor to both lead UT’s newly created Department of Fine Arts and serve as conductor of the KSO. Van Vactor’s dual duties undoubtedly proved beneficial to both organizations. The KSO could pull from a pool of talented students, the students could gain experience performing with a professional orchestra with well-seasoned musicians, and music instructors had an opportunity to play music and augment their teaching salaries.

Van Vactor brought with him to UT his friend, colleague, and transcriptionist George F. DeVine. DeVine would play an important role in creation of the music library that eventually would bear his name. Initially he served as secretary and administrative assistant in the Department of Fine Arts. But his skills as a teacher were soon recognized, and he was asked to teach courses in orchestration, music appreciation, music history, and the literature of music.

The Creation of the Music Library

Just as the School of Music was formed by bringing together two once-separate programs, the Music Library brought together materials once housed in a number of different collections. Soon after its creation, the Department of Fine Arts began developing a collection of musical recordings, scores, and books. As difficult as this is to imagine, that collection was housed and accessed in a stairway of the house the department occupied on the 1500 block of Cumberland Avenue. Musical materials also were included in the collections held in the James D. Hoskins Library—which until 1987 was the main library on campus—and the Education Library, a branch library that supported the College of Education and the Department of Music Education.

When the new Music Building was completed in 1965 to house the music and music education programs, agreements were made to integrate music materials from these scattered collections in what was then called the Music Materials Center. A library assistant supervised daily operations and a committee made up of music faculty, including George DeVine, acted as advisors.

What was then the John C. Hodges Undergraduate Library opened in 1969 and purchased additional musical materials, with even more acquired through the listening center housed there.

Budget shortfalls led to calls for the University Libraries to create, fund, and manage a unified music library within the Music Building. Those calls were answered on July 1, 1971, when the Music Materials Center became a fully functioning branch of the University Libraries and was renamed the Music Library. The appointment of professional music librarian Anne Viles followed soon thereafter, in September 1971. She was assisted by one full-time staff member.

Close Relationships Between the Music Library and UT

A concept now common in academic librarianship is that of the embedded librarian—a librarian with subject knowledge in a specific area who serves a particular academic discipline and teaches or holds office hours within the corresponding academic department, fostering a close acquaintance with the professors, students, staff, and curriculum. Subject librarians working in discipline-specific branch libraries served as embedded librarians before the term was coined. Over the years, the close relationships among UT’s music librarians and faculty, staff, and students in the music program have enabled some extraordinary accomplishments.

Pauline Shaw (later Pauline Shaw Bayne) was appointed head of the Music Library in August 1973 following the departure of Anne Viles. Soon thereafter, Department of Music faculty members Patricia and William Carter helped the University Libraries acquire a gift of manuscripts, archival materials, and scores related to the careers of Ferruccio Busoni and the Carters’ former professor Gottfried Galston. These materials were deposited in Special Collections and indexed by Pauline Bayne in The Gottfried Galston Music Collection and the Galston-Busoni Archive in 1978.

A second major donation to Special Collections was stewarded by Bayne in 1987 when David Van Vactor, after retiring from both his position at UT and as conductor of the Knoxville Symphony Orchestra, donated his personal collection of manuscripts, scores, books, correspondence, and recordings to the University Libraries. These were organized and cataloged by Bayne, Stuart Garrett, Rebecca Smeltzer, and Marsha Michie in The David Van Vactor Collection: A Catalog in 1993. Other significant donations of archival materials facilitated by Music Library staff include the Barry McDonald collection of marching band music and choreography, a collection of the works and recordings of composer and electronic music pioneer Gil Trythall, and a large collection of historical popular sheet music.

Working closely with students and faculty of the School of Music allowed Bayne to help Music Library patrons find needed recordings, scores, and research materials, and her proximity to the school’s day-to-day activities allowed her to better recognize and address some of the unique problems those users faced. The UT Analysis Index was created to help users locate descriptions and program notes for musical compositions within books held by the Music Library. The UT Song Index similarly helps users find individual songs included in the many song books collected by the Music Library.

Student library assistants working in the Music Library have been adding entries to these indexes since the early 1980s, and these unique guides to music literature have been published in various formats. Both are now accessible online and are used by patrons at UT and many other institutions. Because both works index only items held at UT and therefore are not replicated by any commercial product, they have proved useful to generations of music students.

Music students were the first to experience library automation: the University Libraries’ first online circulation system (1984–85) as well as the online catalog (1986–87) were both pilot tested in the Music Library. Given the relatively manageable size of the collection, these holdings also were the first to be bar-coded and entered into a computer-based integrated library system a decade later.

In the midst of this transition to an online library system, DeVine prepared to retire. His involvement had been crucial to turning a small collection stored in a stairwell into a fully functioning branch library. In honor of his contributions to the university and, specifically, the work he had done to establish and support a library to serve the music program, at his retirement dinner, on April 27, 1985, the library’s name was officially changed to the George F. DeVine Music Library.

The professional partnership that brought both Van Vactor and DeVine to the university doubly blessed the Music Library. And the extraordinary collection of primary materials that Van Vactor donated to the University Libraries continues to inspire innovative projects and rewarding partnerships.

Some years ago when libraries were just starting to develop digital collections, the David Van Vactor Collection was the first project selected for digitization by the University Libraries. That project stalled due to a variety of technical difficulties but was revived after the Music Library received a visit in 2016 from Roger Rhodes, Van Vactor’s publisher—and, incidentally, the son of John Clark Rhodes, one of the two music faculty members hired in 1946 to launch UT’s Department of Music Education. Roger Rhodes’s long relationship with the School of Music and the Music Library was vital to development of the Van Vactor collection: he donated a large portion of the works included therein and granted permission to digitize and provide online access to most of Van Vactor’s scores.

The successful completion of the first stage of the Van Vactor digitization project was celebrated at a spring 2019 event. The occasion included a performance of a Van Vactor work by a quintet of musicians from the Knoxville Symphony Orchestra and a remembrance from author and Van Vactor family friend David Madden. Other projects promoting the University Libraries’ special collections that have benefited from Music Library expertise include the Sheet Music Digitization Project; Boundless: Artists in the Archives, which commissions local musicians to compose works inspired by special collections materials; and the recording of background music for the William Derris Film Collection.

New Connections for the Music Library

Nathalie Hristov, music librarian since 2005, has been instrumental in making new connections for the Music Library. She and her husband, Miroslav Hristov—a professor of violin in the School of Music—organize and secure funding for the Ready for the World Music Series, a popular and highly regarded performance series. Each annual concert features musicians from a different region of the world performing works from their home countries that have entered the classical repertoire. The events include displays of Music Library resources on the musical traditions of the region as well as refreshments that represent the culinary traditions.

Hristov also organizes library instruction sessions just for international students enrolled in the School of Music and works with library colleagues and the university’s International House to promote Music Library resources at a series of international coffeehouses. At these weekly coffee klatches, students mingle and sample food from the country or region being showcased. Music Library resources on the music, composers, musicians, and culture of the country or region are prominently displayed.

The Music Library is still a small branch, staffed by two faculty members and two full-time staff members, supported by student assistants. But outreach initiatives, the digitization of music collections, and traditional music reference work—now being done online through email and chat as well as within the library—continue to expand the reach and the holdings of the George F. DeVine Music Library.

DeVine had once had his office within the Music Library. The original confines of that library were torn down along with the rest of the old Music Building in 2010 to construct a new building. When the School of Music reopened in the Natalie L. Haslam Music Center in 2013, the George F. DeVine Music Library took a prominent place on the ground floor. There students from all disciplines are welcomed by a smiling portrait of George DeVine that hangs by the library’s front door.

Adapted from Chris Durman, from the Library Development Review 2019–2020.