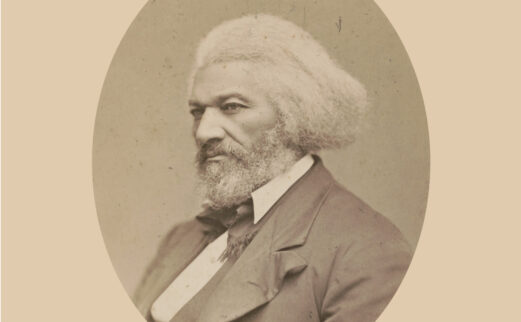 Abolitionist, statesman, writer, speaker, and activist Frederick Douglass was born enslaved in Maryland but escaped from his captors and fled to the north in 1938 as a young man. Although he never knew his birthdate, he chose to commemorate his birthday every year on February 14th. After Douglass’s death in 1895, a group led by African American activist, educator, and author Mary Church Terrell declared his birthday “Douglass Day” as a way to honor his memory and his fight for racial equality. Initially celebrated as a school holiday, Douglass Day helped give rise to Black History Month and today has been elevated to an international event that recognizes and explores the contributions made by Black citizens in the 19th century.

For four years now, UT Libraries has supported Douglass Day festivities by working closely with members of the Douglass Day Committee — currently consisting of Department of English faculty members Katy Chiles, Anne Langendorfer, and Mark Tabone; history professor Robert Bland; undergraduate student Savannah Brown; and assistant professor and librarian Shaina Destine, the Libraries’ liaison to the Department of History. During the celebrations, the campus and Knoxville communities have gathered both in person and online to eat birthday cake and to celebrate Black history and Black leaders through readings, discussion, lectures, exhibits, and performance.

“The UTK celebration of Frederick Douglass Day has been greatly enriched by the participation of Hodges Library,” said Chiles, “Shaina Destine, Chris Caldwell, Allison McKittrick, along with the fantastic facilities staff, have provided vital support by physically hosting the celebration, curating fantastic displays of the Black texts housed in Special Collections, and building LibGuides that educate faculty and students and have been integral to the event’s planning. The Frederick Douglass Day (FDD) planning team is grateful for their important involvement in this celebration of Black literary history.”

“It has been an honor and pleasure to supplement Douglass Day celebrations on campus from the beginning,” says rare books librarian Chris Caldwell. As a former English liaison librarian, Caldwell knew professor Chiles from her many class visits to the Betsey B. Creekmore Special Collections and University Archives. Chiles, who teaches courses in early African American literature and Major Black Writers, has been a steadfast advocate of hands-on experiences with rare materials in the Libraries’ collections. “We want to do everything we can to connect our community with our Black Collections, and Douglass Day is another wonderful opportunity for us to do that.”

Destine, who was asked to join the committee to help plan its 2019 events, saw an opportunity for the library to be even more involved. She approached library administration for funding and in 2020 secured space in the Hodges Library for a large gathering of community and campus participants and partners. Among the guests were Theotis Robinson, who challenged the University of Tennessee administration to become UT Knoxville’s first Black undergraduate student; Derrick Spires, associate professor at Cornell University and author of Frederick Douglass and the Practice of Citizenship; and Rhea Carmon, the Poet Laureate of Knoxville.

Destine involved Special Collections as well. Caldwell and Allison McKittrick, assistant librarian for Special Collections outreach, contributed a pop-up exhibit of Black history for the day including items from University Archives related to Robinson, rare books (including a first edition of Douglass’s My Bondage and My Freedom), and manuscript collections such as African American military scrapbooks. Video clips of the exhibit were shared widely on social media, most notably by the Douglass Day Organization on Twitter @DouglassDayorg.

Another important activity that Douglass Day supports is the transcribe-a-thon. Each year, as part of a day of service in Douglass’s honor, the non-profit Colored Conventions Project selects and promotes an online transcription project. In 2020, those who gathered in the library worked to transcribe manuscripts from the collections of 19th century Black feminist writers and activists Anna Julia Cooper and Mary Ann Shadd Cary. Ms. Cooper was a member of Alpha Kappa Alpha, a historically Black sorority. This presented a unique opportunity for the UT Libraries to engage with the organization on their history.

Langendorfer explains, “Thanks in part to engagement with UT Libraries and librarians, our community has learned how to transcribe historical records and therefore to contribute to making Black history in the 21st century.” By helping to preserve and digitize the papers of important leaders in Black history, participants can feel that they are actually taking part in creating that history.

“Students love transcribing,” Destine says. “They don’t really know what it is at first; but, once they’re introduced to it, they really get into it. My favorite thing is watching the students light up when they realize that they’re actively being a part of history and that they enjoy it.”

In addition to the transcribe-a-thon, UT’s event this year (which is traditionally celebrated on February 14 but was moved to February 12) hosted three Black female leaders from the community to take part in lectures and discussions: professor Shayla Nunnally, chair of the Africana Studies Program at UT Knoxville; Brigitte Fielder, professor of English literature at the University of Wisconsin, Madison; and Enkeshi El-Amin, a sociologist from UT Knoxville and host of the “Black in Appalachia” podcast.

While the 2021 event went virtual due to Covid-19 precautions, the FDD Committee and UT Libraries still found ways to partner. Destine’s 2020 Frederick Douglass Day Research Guide was so widely shared and highly regarded that Sharepoint, a Microsoft web-based collaborative platform, invited her to speak at a conference to discuss her creative process. This year, she raised the bar again, with her Frederick Douglass Day 2021 Research Guide, which shares information not only about Frederick Douglass and Douglass Day but also includes a biography of Mary Church Terrell and introduces the events’ honored guests. Also included are resources about other important 19th century Black women leaders, relevant documentaries, movies, podcasts, and related books and publications.

In addition, McKittrick produced four videos of archival materials related to Mary Church Terrell, which were played during the events and included in Destine’s research guide. Consisting of pamphlets from Ida B. Wells-Barnett, W. E. B. Dubois, and the NAACP, as well as a 1948 report on segregation in Washington, DC, the full playlist of Douglass Day 2021 videos from Special Collections can be found on the UT Libraries Youtube.

“The UT Libraries — librarians and staff — have been phenomenal partners for our annual UTK celebrations of Frederick Douglass Day,” Langendorfer says. “We look forward to many more years of celebration and collaboration with our community, including UT Libraries, in the quest to share the achievements of African American history, literature, and activism, while also building a vibrant future for Africana Studies, History, and English at UT.”

For now, the Frederick Douglass Day Committee is taking the semester off to attend to other duties. However, as soon as next year’s theme is released, they will return to the drawing board to think of creative ways to celebrate Black history for 2022. If you are interested in becoming a member of the Frederick Douglass Day Committee, please feel free to email sdestin1@utk.edu.

For further information on Black Collections materials, contact the Betsey B. Creekmore Special Collections and University Archives at special@utk.edu.