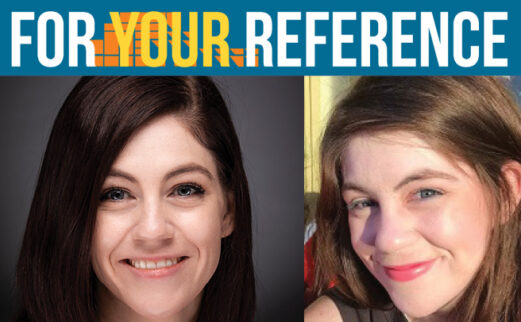 Communication professors Jordan Allen and Nicole Allen were our guests September 16 on For Your Reference, the UT Libraries’ series of livestream chats with university scholars.

Nicole Allen (Utah State University) told our audience, “Most of my research looks at public discourse. And I use a lot of rhetorical theory.” In joint research with Jordan — who is her twin sister — she looks at families and individuals who find themselves outside the prescribed norm.

The first segment of For Your Reference is organized around the meme of Reviewer 2 — familiar to academic scholars as that fellow academic who has been asked to review the research paper you submitted for publication, the dreaded reviewer who totally misconstrues your premise or (worse yet) points out the fatal flaw in your theory.

For the benefit of the evening’s discussion, Nicole played the role of Reviewer 2, querying Jordan about her research. Robin Bedenbaugh, our For Your Reference moderator, introduced the topic for discussion. “You are going to be talking about methodologies. So, your question is: How can we expand our definition of multi- and mixed methods?” “And why, in your research, is this an important question to think about?” Nicole added.

Family communications scholars seem to approach the subjects of their research as if the family stands apart from and is unaffected by the wider public discourse.

“One of the reasons that taking a multi-method approach — which for us is using qualitative interpersonal communication methods, interviews, focus groups, and (what Nicole does) rhetorical public discourse methods — is that there’s a fundamental belief that families are private and that their communication has to be studied in isolation of almost everything else,” Jordan explained. “But what we know, especially for families who exist outside the norm, is that public communication is very important, and it particularly shapes and impacts those relationships. So having a dual, multi-method approach lets us tackle that in a way that having a single approach wouldn’t really be able to capture.”

“Let’s focus on the twin studies,” Nicole suggested. “How would having me and the rhetorical approach help you in that case? What did it reveal or unveil that perhaps we would have not examined otherwise?”

Jordan explained, “The scientific discourse surrounding twins (zygosity, whether they’re identical or fraternal) — it’s largely like a public discourse. Without [understanding] the rhetorical nature of it we wouldn’t be able to trace how it actually influences and shapes twin identity — sometimes problematically for twins. Without having that broader, more global view we wouldn’t have insight into some of the struggles — particularly with being identical or the importance of being physically similar… and the social expectations that come along with that. So, it’s all linked in kind of this complex way that you couldn’t see without at least two methods.”

In a rhetorical critique of the scholarly literature on families, Jordan and another scholar found that the “healthy” family is defined as having open communication. “By the very nature of having communication be a key element of family relationships or ‘functional’ family relationships, anybody in an estranged relationship, even if they were happy, … couldn’t be considered, themselves, healthy. There are no discursive resources for them to articulate that, even though that was their lived experience,” Jordan said. “Because I’m a social scientist, my reflex is just to believe the social science. … That was a big hurdle to overcome: to see how the literature was constructing the ‘healthy’ or ‘functional’ family.” She found that she needed to take a post-positivist perspective: “You can’t study how this professional public communication is shaping [the definition of the ‘functional’ family] if you believe it’s a ‘given.’ You have to inherently believe it’s a construction on some level.”

Interview subjects in “functionally” estranged relationships reported feelings that were almost a mirror image of the prescriptions dictated by the scholarly literature. “A participant would say, ‘I don’t feel the need to reconcile,’ but the literature would say people who are estranged should absolutely try to reconcile the family.”

“Probably persuading other people to not automatically accept that literature is kind of a challenge,” Nicole chuckled.

Jordan and Nicole received some negative reviewer comments on a jointly authored critique of the current methodology of twin studies. “It was sort of our first stab at doing a rhetorical piece with the qualitative methods piece,” Nicole explained. “It was a rhetorical analysis of the twin methodology and ideologies of biologicalism that kind of go along with that. And then we paired that with these interviews.”

Despite the reviewer’s criticism of their methodology, it was precisely their multi-method approach to the topic that led them to scrutinize the problematic history of twin studies. “One thing that I appreciated about working on this with you,” Nicole said, “was that we just started working on twins and then I got into the history of twin studies. And it was never really clear to me until I got to the very founder of twin studies and we found out that …  he was also the founder of eugenics, and he was the founder of the nature-versus-nurture divide. … He’s most famous for advocating for twin studies — but also for working with Joseph Mengele. And then twin studies comes to the United States and enjoys a similar very controversial history. And, so, I think that, had we just thought about twin studies in the current moment, we miss this whole history that examines how twin studies and nature-versus-nurture undergird this whole sort of racist, white supremacist, racial hierarchy. … Because I feel like people who are just going to read a paper about twins and how they negotiate intimacy should also be very aware of this history. Because it’s one that no one in communication studies talks about when they’re using the twin studies methodology today.”

“We’re hoping we can build on the previous work,” Jordan added, “because I think it’s also important to point to how … in interpersonal and family communication discourse these very problematic logics are kept alive.”

Robin asked our guests what, in hindsight, they would do differently when publishing their multi-method critique of twin studies. Jordan said that they would be more explicit about the goals of the article, and they would not attempt to do so much in one article. They appreciated the constructive criticism they received. “These comments were just phenomenal, and they shaped, really, our research agenda for the next two or three years. … We took this one publication, and we turned it into a series of what will now be three publications.” Jordan’s advice to her students who receive criticism of their own work: “Just be patient. It doesn’t mean you don’t have good ideas. It just means you don’t know everything. You have to take the advice, right?”

In “Check This Out,” the information literacy portion of the evening, librarians Paris Whalon and Shaina Destine offered tips on resources and tools one can use to continue learning about the subject of family communication. The final segment featured librarian Sarah Johnson recounting her genealogical research into her family’s roots.