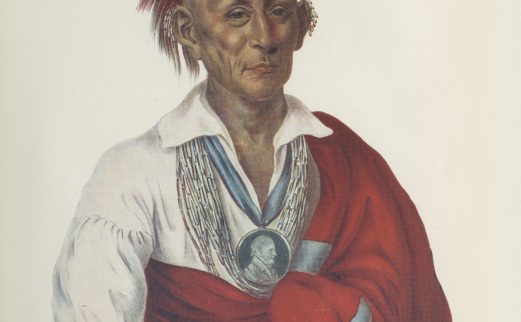 In 2014, Special Collections purchased a first edition of a historically significant work—the autobiography of Black Hawk, a Sauk chief who waged war on the United States in 1832.

Black Hawk’s Life of Ma-ka-tai-me-she-kia-kiak, or Black Hawk, published in 1833, was transcribed and translated into English from the testimony of the Sauk chief. It was one of the first Native American autobiographies published in the United States.

Chief Black Hawk’s recounting of his life and the Sauk insurrection of 1832 influenced another debate, over the rights of America’s indigenous peoples. White settlers began encroaching upon the Sauk nation’s ancestral homelands in the early 19th century, challenging the Sauk’s sovereign right to their land. The Sauk and other tribes living east of the Mississippi River were pushed west of the river.

The chief led a fight against approaching U.S. armies, known as the Black Hawk War. Black Hawk’s small band had several successes before a disastrous defeat at the Battle of Bad Axe. Black Hawk escaped capture at Bad Axe but later surrendered. He and other imprisoned leaders were held for a few months before being released. Black Hawk’s autobiography, dictated to a government interpreter, was published in 1833. It became an instant bestseller, going through five printings within a year.

*Adapted from an article in Tennessee Today: News and Events for the UT Community, May 27, 2014