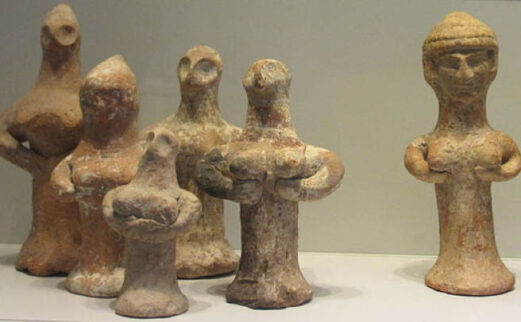 How do figurines challenge what we think we know about ancient religion and the lives of everyday people?

Two UT professors who study ancient figurines addressed that question on the November 18, 2021, episode of For Your Reference, the UT Libraries’ original livestream show. Erin Darby is an archaeologist, an assistant professor in religious studies, and an expert in the Hebrew Bible and Old Testament archaeology. Theodora Kopestonsky is a distinguished lecturer in classics who specializes in ancient Greek and Roman art and archaeology.

Kopestonsky launched the discussion by posing another question: “What’s the point of figurines? Why even bother studying these things?”

Darby, who has published an in-depth study of Judean pillar figurines, had turned to this research topic in part to clear up misconceptions about these small clay figures found at archaeological sites throughout the Near East. The statuettes portray females holding up prominent breasts. A cylindrical pillar forms the bottom half of each figure — thus the name “pillar figurines.”

“In my field I thought people were writing about figurines all the time but doing it really poorly,” Darby said. “Now, my figurines are females. They are primarily heads with breasts and then a pillar body. And so that, it turns out, invites a lot of speculation about what they’re for, why they’re in ancient Israel. People try and connect them to the Bible. That doesn’t work particularly well. So, I actually got interested in figurines because of all of the — sometimes serious, sometimes ridiculous — scholarly interpretations and popular interpretations of my little ladies.

“Because there’s this push and pull between the biblical record of what happened in ancient Israel and what archaeologists actually excavate, it challenges quite a lot of our suppositions. If your suppositions were based only on the biblical record, if you assume that ancient Israelites didn’t make any images at all, what do you do when everywhere you excavate in the 8th through the 6th centuries BCE you’re excavating figurines? … If you read only the Bible you may get this impression that you can’t make any images whatsoever. But when you excavate regular people’s houses, what you find is that there are images all over the place.

“For a long time, people approached the figurines … just as images rather than as the end result of a ritual that’s much bigger than the figurine itself. And, so, using figurines to talk, as much as we can, about the rituals in which figurines were used I think gives you such a rich and more interesting picture of everyday religious activities.”

It’s hard to reconstruct a ritual from an excavated fragment. The ritual context is far more complicated than we may assume. An excavated figurine does not necessarily represent an object of worship. “When we look at the past, I think sometimes we draw a picture of it that’s too simple,” Darby said. “We stand at this distance, and so we homogenize everything into a simple narrative.”

The pillar figurines appear only within the polity of ancient Judah and mostly in domestic settings. And there is a paucity of surviving examples. By contrast, a plethora of ritual objects survive from the ancient Greek world studied by Kopestonsky. “We have them in burials. We have them in houses. We have them at sanctuaries … production centers … workshops. … They’re integrated in the lives of the ancient Greeks in such a way that is kind of overwhelming.” At some sites, figurines occur in the tens of thousands — for instance, the Sanctuary of Demeter and Kore with 24,000 figures or the Corycian Cave near Delphi with over 50,000.

Kopestonsky showed a photograph that included different examples of figurines from the Greek world: the commonly seen standing female figure, dancing groups that suggest nymphs, and figures of animals. “For me it’s about numbers sometimes … If you start to see something repeated again and again and there’s a lot of them — that, we start to see, is significant. But then you have to determine: Are we looking at a workshop? Are we looking at a sanctuary? Why are they there?”

Referring to the Judean female pillar figurines, Darby noted that “the presumption had been that they were made …  only by women … or that they were used only by women for concerns we somehow assumed would only be women’s concerns.… It’s really hard to go from a figurine to the population that used it and use only the iconography … to make that assumption.” This unwarranted leap in logic has occurred partly because the pillar figures are not deposited in shrines and there are no accompanying inscriptions. “Whereas, in your case, you’ve got these awesome shrine deposits!”

“We have a dominance of female figurines as well in the Greek world, but … there’s far more variety,” Kopestonsky said. “One of the things I think is really interesting about figurines generally, at least in my world, is how the range of types is present. And, so, they have things to tell us about what people are doing in their daily lives — like there’s images of people making bread, sitting at an oven. There’s one of a man grating cheese.… But then there’s also whimsy. So, it doesn’t have to be all these serious standing females that are being dedicated at sanctuaries. You also have things being dedicated and placed in graves. And my favorite are monkeys. So, there’s a whole series of monkeys doing silly things.”

Regarding the settings where figurines are found, Darby said, “Some of my colleagues will — they’ll be frustrated that so many of our figurines are in a disposal context, not in the context of use.… I also like to think about the afterlife of figurines, after they’re broken, right? The little kids who might play with them in the courtyard. Or how you might reuse them to level the floor. Mine, you know, they didn’t deposit them in a ritual pit and deactivate them. They’re just the materia of everyday life. And the biggest contexts in Jerusalem, where I spend a lot of my time thinking about figurines, are … they’re thrown in to like make construction fills.… They’re the landscape of, kind of, daily life.… They continue all the way to, like you said, we excavate them today.”

The scholars discussed the joy and the awesome responsibility of being an archaeologist. Kopestonsky said, “One of the most amazing things I think about being an archaeologist and studying these is: I work at a place at Corinth, and it’s been under excavation for over a hundred years. And so you go into the storerooms, and not only do you get to see the material that’s been excavated, you also get to see the material and the written explanations and drawings of people who’ve been there and studied the material in the past. So, your heroes — my heroes — who are studying the material. And, so, the rewards of going in there and just seeing cabinets, for me, just drawer after drawer after drawer of figurines that are unique and special is something that I enjoy. And I think it’s such a privilege that I have to be a scholar of this.”

Are there methods for keeping one’s own politics and identity from affecting the scholar’s interpretation of excavated materials?

“I think maybe it’s marked more by the effort at doing so than it is by our success in an absolute way,” Darby said. “You dig what you find — not what you were looking for. And it doesn’t matter what you thought was there; you are now responsible for preserving that for — not just anyone who comes after you — but anyone with any research question that comes after you. So, essentially, you have to document every single thing you excavate with the same level of care and detail and cultural sensitivity to the place where you’re working as the primary object. So, you know, [professor Kopestonsky] is interested in figurines, and she’s working in a site in Corinth, and she excavates something that’s, like, medieval. She’s got just as much of an obligation to care for that material as she does her primary research interest. So, archaeologists — we’re caretakers, right? Archaeology is destructive. You can’t go back and do it again. When we excavate it, it’s gone. So there’s a heaviness, a weightiness, to playing that role.”