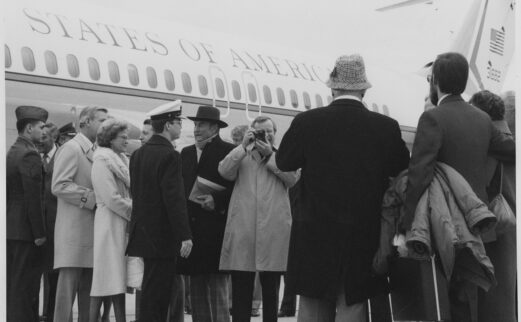 “When scholars and journalists want to know more about East Tennesseans who have influenced national policy or international affairs over the past century, they turn to UT’s Modern Political Archives (MPA). The MPA — a branch of the University Libraries, but housed, appropriately, in the Howard H. Baker Jr. Center for Public Policy — comprises roughly 150 collections of materials chronicling some of the most influential public servants from East Tennessee. These materials, from Senate correspondence to campaign materials, were donated to the university to be preserved for posterity,” according to Kris Bronstad, the UT Libraries’ modern political archivist.

“As archivists, our goal at the MPA isn’t only to preserve materials but also to ensure that researchers can find and use the materials in our care. Researchers who want to truly delve into the roles of Tennesseans in affairs of state must visit the MPA in person.

“Yet our political treasures have broader appeal. To share those treasures with a wider audience, we are digitizing images from some of the more popular collections and making them available online.”

We invite you to explore some of those digital collections:

Estes Kefauver (1903–1963), a UT alumnus and East Tennessee native, served in the US House of Representatives for almost ten years (1939–1949), the US Senate for almost 15 years (1949–1963), and twice ran for President. This collection includes images from his life and political career.

Photographs from the Life and Career of Howard Baker

“Howard Henry Baker Jr. (1925–2014) was the son of a US representative from East Tennessee. Born and raised in Huntsville, Tennessee, he attended the McCallie School in Chattanooga and, after a stint in the Navy, graduated from UT Law School in 1949. In the year following his father’s death, Baker followed him into politics, running in a 1964 special election to fill the US Senate seat vacated by the death of Estes Kefauver. Baker lost, but in 1966 he became Tennessee’s first popularly elected Republican senator.…

“Baker’s hobby and passion was photography. Few of the photographs in our digital collection, however, are Baker’s own,” Bronstad said. “Instead, we see Baker through the lens of media, government, and family — meeting with political colleagues, small-town constituents, and foreign dignitaries. Sometimes we even see Baker himself behind the camera.”