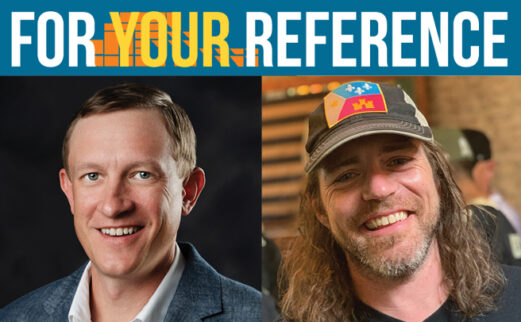 Did inflammatory political rhetoric incite an insurrection at the US Capitol on January 6? That was the question debated by two scholars of rhetoric at our February 17 episode of For Your Reference, a discussion series aimed at helping people navigate an increasingly complex media and information environment.

Our host Robin Bedenbaugh introduced the evening’s topic by distinguishing rhetorical analysis from traditional critical thinking skills that emphasize the strength of arguments, the soundness of reasoning, and the reliability of evidence. Rhetorical analysis, on the other hand, emphasizes the appeal of an argument and what makes it persuasive to an audience. Rhetorical analysis attempts to decipher why people believe irrational things and to neutralize harmful discourses.

Guest scholars Jeremy Rogerson and Lucas Logan joined us to analyze the rhetoric of January 6.

Rogerson is a lecturer in the Department of Communication at Mississippi State University as well as a doctoral student in the College of Communication and Information at the University of Alabama. “I study rhetoric of violence, especially as it relates to war,” he told our audience. “And I’m working on my dissertation currently, where I’m looking at the rhetoric around torture and how that kind of came to be normalized during the ‘war on terror,’ especially after 9/11.” His dissertation looks at presidential rhetoric, how the media crafts narratives around torture (including dramas like 24 and Zero Dark Thirty), as well as public memory (how we memorialize and think about instances of torture after the fact).

Lucas Logan, an associate professor of Communication Studies at the University of Houston Downtown, teaches courses in communication, media, and communication law. A current interest is intermediary liability law (e.g., the intersection of government and private interests regarding how people are allowed to communicate online). We invited Logan to serve in the role of “Reviewer 2,” the contrarian and hypercritical fellow scholar.

Looking back to January 6, Rogerson reminded us that correlation does not equal causation. “But I think we can make the case that rhetoric certainly played a significant role.… [O]ver the campaign and in his four years in office, Trump characterized his supporters as people who were losing something. So, he appealed to the threat of loss of their way of life or ‘their America’ … If we view January 6 as a culmination of all of Trump’s previous rhetoric, it makes sense that his supporters saw these previous threats as somehow very real now. And they’re losing their president, which in turn for them means that they’re going to lose everything else that they’ve come to believe. So, essentially, they were kind of primed for that moment.”

Logan objected to characterizing January 6 as an “insurrection.” A few violent White extremist groups were spreading conspiracy theories and coordinating their activities on January 6. But rather than seeking direct action, most Trump supporters expected their president to step forward as a savior. Many simply acted as if they were at a festival. Because of race and class privilege, they thought they could simply walk into the Capitol and do whatever they wanted. “There were people that were shocked that they were getting put in handcuffs, because, you know, that doesn’t happen to people like them.”

“If you look at the backgrounds of these people,” Logan continued, ”they are people that feel that they’re experiencing loss and that they’re losing America, as you said. … We are living during, you know, the collapse of empire … Collectively, everything is getting worse and worse. And even though those people are still, you know, affluent … they are looking around and seeing a declining nation.”

“[T]here’s another strain of thought about rhetoric: that rhetoric is constitutive. … It argues that language and symbols can constitute or essentially shape or create a collective identity for an audience,” Rogerson said.

Social media sites have become echo chambers where the most toxic rhetoric reverberates. “I think that’s where at least Trump’s rhetoric — or if you want to call it Roger Stone’s, whoever was making the arguments for Trump and knowing exactly what to appeal to, to stir up this very specific base. … It got into these small echo chambers where it could fester,” Rogerson said.

“People get wrapped up in these narratives and thinking that they’re trying to save America … The Trump campaign really jumped on that. And they really knew exactly what to do.” Logan said.

Rogerson compared some of the rhetoric encountered on social media to war rhetoric. “If you’re going to whip a population up for war, you’ve got to really dehumanize the enemy, make a very clear distinction between us and them. … It’s very, very troubling, because people act on this, you know. They constitute themselves in a very specific way, and then they constitute anyone that’s different. … It’s a very dangerous game to play.”

“And I think you’ve really got to look at the role of the media. And at first, I mean, Trump’s campaign was even considered a joke. But the media saw the ratings bonanza that they got from covering him — which legitimized him as a candidate before the primaries ever even began.”

The scholars decried the enormous power of social media platforms, as well as their ineffectual — or perhaps disingenuous — efforts to shut down the conspiratorial narratives and toxic disinformation. “It was just awfully convenient how they threw him [Trump] off social media, you know, as soon as as his time was up, as soon as they didn’t really care anymore,” Logan said. “And that really showed to me who has the actual power there in that circumstance. You know, it is our social media — our tech overlords.”

“I do believe in strong protections for social media outlets or just any kind of information outlet,” Logan continued. He emphasized that social media should have some measure of protection from frivolous lawsuits. And they should not be held liable for hate speech or incitement of violence posted to their platforms. “But they should not be able to decide what is incitement, what is hate speech. … I think that there should be some kind of federal regulation there. If it was up to me, they would be just nationalized — I mean, they’re public utilities.”