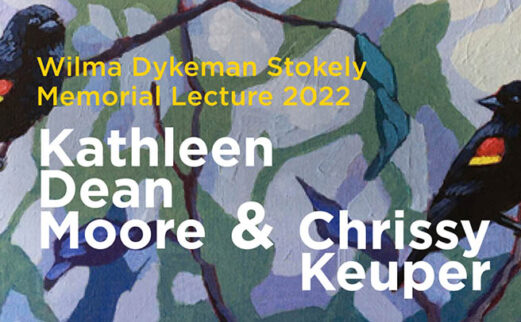 Environmentalist Kathleen Dean Moore Asks: What does it mean to love the world?
by Martha Rudolph
April 13, 2022  •  14 minute read

Environmental philosopher Kathleen Dean Moore was delivering the 2022 Wilma Dykeman Stokely Memorial Lecture on March 3. The event celebrates the legacy of writer Wilma Dykeman Stokely and advances her cherished causes of environmental integrity and social justice. The Friends of the Knox County Public Library established the lecture in 2007 and has jointly sponsored the series with the John C. Hodges Society of the University of Tennessee since 2013. This was the second virtual installment of the annual lecture.

“We gather here in Tennessee at a hinge point in planetary history,” Moore said. “You could drive a nail through this decade, and the fate of this beautiful Earth would swing in the balance. And the question then is: What kind of a story will these pivotal years be? … The story of global warming, I think, is definitely a crime novel.… It’s a thriller whether we can stop fossil fuels in time and draw down the greenhouse gases in the atmosphere before runaway planetary change is irreversible. But the story that I want to tell in the end is a love story to this glorious planet.…

Moore is eloquent in evoking the beauty of the world. She begins by quoting Dolly Parton’s song “My Tennessee Mountain Home.” Speaking of species extinctions, Moore notes, “Since Dolly Parton wrote that song in 1973, 40 percent of everything that has the breath of life — animals and plants — has been erased from the face of the Earth.… The songbirds — the populations of the birds that we love the best, the red-winged blackbirds, and the robins, the thrushes — they have been cut by a third.…

“Unless we act against climate change, I will die in a world — you, too, will die in a world that is half as rich and life-drenched as the world we were born into. My grandchildren will be able to tear out half the pages in their field guides. They won’t need them.… Unless immediate action is taken to reduce greenhouse gases … by the time today’s children are middle aged, the life supporting systems of the planet will be irretrievably damaged.… So, we who love the world had better get down to work!

“Which raises my second question: What is the work of loving the world?”

To answer this question, Moore guides us down three of the world’s beautiful rivers. First, the Marys River just a mile from her home in Oregon “It’s pretty good luck to live in a time of thrush song. To live in a time of twelve hundred species of rhododendrons — many of them in your own national park. To live in the time of laughing children and frogs that sing love songs.” Moore recounts a canoe trip with her husband, winding through a slough on the Marys River. She and her husband are listening to the tree frogs. Reading from her book Earth’s Wild Music: “I’m rejoicing at the sounds of the night. And Frank is explaining the biomechanics of frog’s song. ‘Imagine blowing up a balloon,’ he says. ‘Now imagine blowing up a balloon made of your neck skin,’ he says. ‘Now imagine blowing it up twice your size. Now,’ he says, ‘hold it there and tremble all night.’…

“So, here’s what I want to say: It is this love for the world, our joy in its glory, that is the foundation for our obligation to its continuing.… The first duty of a person who loves the world is to celebrate it,” she concludes.

Next Moore takes us to the northwest province of Botswana, to the Okavango River, a river that is subject to terrible flash floods. “Whenever the upstream farmers and the communities there along the rivers and the streams notice there’s signs of flooding, they notify their downstream neighbors that the floods are coming. They do it by drumming and blowing horns and shouting and singing. To me, that’s a morally beautiful thing: the dance of shared alarm. And, so, I would ask: Can we do less, living here on the river of time, we who have a clear vision upstream and downstream to the consequences of global warming and climate justice? Can we do less than also sound the alarm?

“Here’s what troubles me: Fully 65 percent of Americans feel a personal sense of responsibility to help reduce global warming. Sixty-five percent of us. And yet an even higher percentage — 67 percent — say they rarely or never even talk about the crisis. What gives, America? I sort of get it. People don’t want to hear grim, and nothing angry or alarmist. They don’t want to hear anything too dark. Give us reasons to hope, they tell me.… But give me a break! We are well on our way to turning Earth into Venus, a planet that, it must be noticed, doesn’t support life. And we’re not supposed to talk about it!… We have to, as a matter of will and courage, face the truth of our time.… We know that an economy that prides itself on accumulating wealth instead of sharing it, a culture that gobbles up the fecundity of the planet instead of nurturing it, an economy of infinite extraction will kill off the sources of its sustenance. We know that, if we don’t put the brakes on climate change now, it probably can’t be stopped. We know that fossil fuel companies — to make astonishing, unimaginable profits — have shown themselves perfectly willing to take down the systems that sustain life as we know it on Earth and cause suffering on a scale never before seen. We know. And that knowing has moral consequences.…

“There was a time when people understood global warming to be an environmental disaster posing existential danger to polar bears, jungles, boreal forests. But climate change is now revealed as also a global crisis of social and racial injustice, shimmering with human suffering. And that suffering falls first and most severely on the poor, especially women and children, on people of color, and on indigenous people north and south. What strikes me as morally unspeakable is that the geographies of climate injustice and vulnerability now map closely on the historical patterns of colonialism and socioeconomic, racial, and gender injustice. Pope Francis said climate disruption is one of the greatest moral disasters of human history, because the people who will suffer the most have been the least responsible for its cause. We have to talk about justice. We have to talk about the violation of human rights.… What the Okavango River tell is that the Earth lover’s second duty is the duty to warn, the duty to speak out.”

Moore then told the story of the Willamette River near her hometown of Lancaster, Oregon — once a bustling steamboat landing. But literally overnight, following the great flood of 1861, the river tore open a new channel, and its course was altered forever. “That flood ripped at the riverbanks and tore out the great cottonwoods. And sometime in the night the river force jammed up against the mud and up against the cottonwoods that had fallen into the river. And, with nowhere to go, the river tore open another channel, and by morning it was flowing along two and a half miles away.” The mechanism that changed the course of that river is called an avulsion. “That’s the word for what happens when a river’s own force creates so many blockages that it drops its load and goes a different way.… That’s what we need: Let us create avulsions.”

We all feel so helpless against the powers that be. “I had agonized: How could earth’s defenders ever stop a river that flows with that kind of power? But I get it now. We don’t have to stop the river with one big dam. We just have to jam it up all over the place.… The work of every person who loves this world is to make a small deflection.… Just get in the way of the destructive forces.… And remember: We’re not trying to save our way of life. No, we’re trying to save the world from this way of life’s destructive power. So, that’s what the Willamette River has to teach us.… An earth lover’s third duty is to defend.…

“So, may you find the will and the courage to defend the world you love too much to lose,” Moore concluded.

Keuper quizzed our guest about the language she chooses to speak about the climate crisis. “I wonder if there are certain words … that you don’t think we should use. And maybe give us some words that we should use instead.”

“So many people want to tell me … not to use angry words, not to use blaming words, not to use outraged words,” Moore said. “People tell me not to use words of fear and trepidation and sorrow and loss. But then how do we talk about what is happening? You have just seen me try to change the narrative from battle to love. You’ve just seen me try to turn from action that’s based on fear for the future to action that’s based on excitement about what we might create to protect what we love. But I think there’s room for all of those kinds of narratives. In a different setting I would defend outrage … as a measure of our conviction of what’s right.”

“Could you tell us a little bit about your book Take Heart? Keuper asked. “How you can teach us to take heart?”

“Climate activists are tired. They’ve been fighting this battle since the ’70s. People are discouraged,” Moore said. “The important thing about that book is … it’s not offering hope; it’s offering courage.… People think that they really have only two choices … On the one hand is hope, and on the other is despair.” But hopes can be false, and despair leads to inaction. Both are a form of moral abdication. “I would encourage people to think about that as a false dichotomy. Because between hope and despair there’s this moral ground that we call integrity.…

“The question people come to is always: What can one person do? And the answer to that, I think, should be: Stop being one person, you know. Join up with other people.… There are people already out there who are doing brilliant things.”