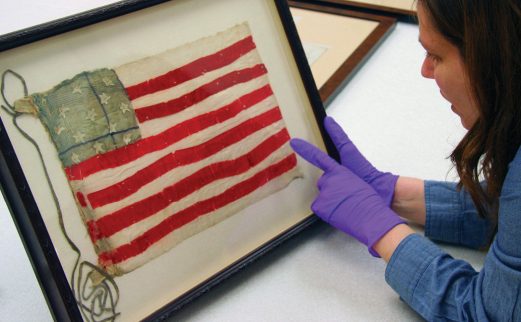 Knoxville-born Robert Tatum was a young postulant to holy orders ministering to the native Alaskan population when, by sheer inadvertence, he became a member of the party that made the first ascent of Denali, the highest peak in North America, in 1913. UT’s Special Collections holds a small treasure with a singular connection to that milestone in American mountaineering.

Sometime in the 1950s, Robert Tatum, then a retired Episcopal priest who had spent the last years of his vocation in Knoxville, deposited some of his personal papers in Special Collections at the University of Tennessee Libraries. Present Special Collections staff are unsure of the circumstances of the gift. And it is unknown whether the significance of those papers was recognized at the time that Robert Tatum’s diaries became part of our special collections. But one of those diaries, it turns out, was a journal recording Tatum’s pilgrimage to “The High One.”

On June 7, 1913, four climbers reached the south summit of Denali (better known, at the time, as Mount McKinley). It was the first successful ascent to the pinnacle. The team that summited Denali in 1913 included Hudson Stuck, Harry Karstens, Walter Harper, and Robert Tatum.

It was mere happenstance that Tatum joined the climb to the top. The 21 year-old Tatum was teaching at the Episcopal mission school at Nenana, Alaska, when he met Hudson Stuck, then Episcopal Archdeacon of the Yukon. Stuck, an experienced climber and dog musher – another essential skill for mountaineering in the Arctic – had followed the exploits of other mountaineers who had made forays on Denali and decided to make his own essay of the imposing massif. He enlisted Tatum as the camp cook for a planned ascent of Denali the next year. As camp cook, Tatum would have been stationed at base camp awaiting return of the team that was to attempt the summit. Yet even a trek to base camp would be a mountaineering feat. Tatum, the only inexperienced climber in the party, trained by hiking more than a thousand miles during the winter months that preceded the expedition. Just one week ­­­before the scheduled departure, Stuck invited Tatum to replace another climber who was unable to join the team.

The team set out from Nenana in mid-April of 1913. Assisted by two Athabascan boys, the adventurers relayed supplies over 100 miles by dog sled before beginning their climb. Over twelve weeks, they braved bitter cold, altitude sickness, treacherous crevasses, and the constant threat of avalanches to reach the summit.

The Significance of Tatum’s Trek

Tatum’s journal of those weeks had lain in a small box in UT’s Special Collections for more than half a century when librarians received an email from a museum curator in Fairbanks, Alaska, inquiring about a loan of the diary. In fact, the University of Alaska Museum of the North was able to track down and borrow the diaries of all four climbers who reached the summit on June 7. Thanks to the internet and to archives, libraries, and climbers’ descendants who preserved the cherished journals and other keepsakes, the museum’s “Denali Legacy” exhibition is able to tell the story of the first ascent through the words of the intrepid adventurers and some of the objects they carried on their groundbreaking climb. Denali Legacy: 100 Years on the Mountain was on view at the University of Alaska Museum of the North in 2014.

The curator’s request to borrow Tatum’s journal prompted Special Collections to scan Tatum’s diaries (the Denali diary and seven other small diaries that chronicle Tatum’s experiences as a priest) and a photo album to create a digital collection. “The Robert G. Tatum Digital Collection” is viewable online.