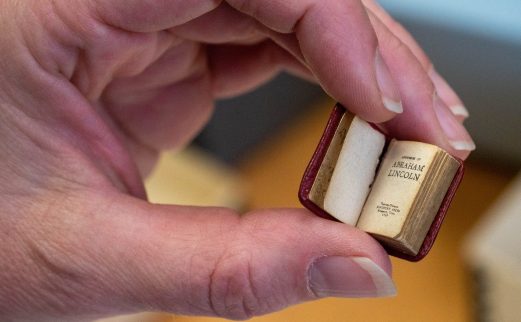 The Betsey B. Creekmore Special Collections and University Archives builds collections of manuscripts, rare books, and other unique primary research materials to support the scholarly interests of the University of Tennessee community, the residents of Tennessee, and researchers around the world. Here are a few of the more unusual objects to be found in the UT Libraries’ archives.

Miniature book: Addresses of Abraham Lincoln (Rare Books, E475.55.L5 1929). This tiny book — at just under two centimeters high, the smallest in the UT Libraries’ collections — includes the unabridged text of the Gettysburg Address. It is one of a set of three tiny volumes of Lincoln’s speeches published in 1929 by the former Kingsport Press to show off the skills of the press and its workers. Like any other hardback book, it includes a title page, a dedication, page numbers, and even an index.

Button from a jacket tailored by Andrew Johnson (Andrew Johnson Coat Button, Manuscripts Collections, MS.1550). Andrew Johnson, the 17th president of the United States, was a self-made man. He was born in a two-room shack and never attended school. At age 10 he was bound out to work as an apprentice to a tailor. Before entering upon a political career Johnson had established his own successful tailoring business in Greeneville, Tennessee. The button in our collection was originally part of a coat that Johnson made while working as a tailor in Greeneville.

Inscribed jawbone presented to US Senator Estes Kefauver (Estes Kefauver Papers, Modern Political Archives, MPA.0144). Estes Kefauver, US Senator from Tennessee between 1939 and 1949, was known as a master campaigner with a larger-than-life personality. Our collection of Kefauver’s political papers includes the usual examples of campaign memorabilia such as keys-to-the-city — as well as this odd memento from Kefauver’s campaign swing through Grant’s Pass, Oregon, during his 1952 bid for president. The inscribed jawbone (most likely from a cow) was presented to Kefauver by the Grant’s Pass Cavemen. The local booster group was noted for dressing in furs and caveman wigs and performing antics such as initiating politicians into their club. Grant’s Pass is the county seat of Josephine County, Oregon, home to the Oregon Caves National Monument and Preserve. The local high school mascot is the caveman.

Clarence Brown’s walking cane (Clarence Brown Papers, Manuscripts Collections, MS.2010). Among the University of Tennessee’s many illustrious alumni is the legendary Hollywood film director Clarence Brown (1890–1987). Brown enrolled in UT at age 15 and by age 19 had earned degrees in mechanical and electrical engineering. The young engineer’s career path quickly veered from the automobile industry to the burgeoning film industry. After an apprenticeship under silent film director Maurice Tourneur, Brown moved to Hollywood, where he directed many of the great stars of the golden age of motion pictures—Greta Garbo, Lionel Barrymore, Clark Gable, and Joan Crawford, among others. He was Garbo’s favorite director, producing seven of her films including her first talkie. Brown’s $12 million bequest to the university built UT’s Clarence Brown Theatre and endowed the theatre company. The Clarence Brown Papers includes shooting scripts of 40 films, still photos from 52 of his productions, scrapbooks, correspondence, and memorabilia from his career. The ornate walking cane is inscribed with Brown’s signature.

Dried flowers given to Margaret Gray Blanton by Sigmund Freud (Margaret Gray and Smiley Blanton Papers, Manuscripts Collections, MS.0739). Margaret Gray had only a sixth-grade education when she married Smiley Blanton in 1910. Her husband’s career as a physician and professor of speech disorders and child development allowed her to take university courses. Over the years, husband and wife co-authored several books. In 1929, Smiley Blanton spent several months in Vienna undergoing psychoanalysis with Sigmund Freud. No doubt, this was the period during which Margaret Gray Blanton received the flowers. Smiley Blanton later became a practicing psychoanalyst. His Diary of My Analysis with Freud was published after the author’s death. Smiley Blanton was also the co-founder, along with Norman Vincent Peale, of the American Foundation of Religion and Psychiatry. The dried flowers were saved in a papier-mâché box.

J. G. M. Ramsey’s wallet (Ramsey Family Papers, Manuscripts Collections, MS.0253). Typical of 19th-century wallets, this example features separate compartments for gold coins, postage stamps, and the owner’s spectacles. James Gettys McGready Ramsey (1797–1884) was a Knoxville physician, banker, and historian and the author of a 700-page book on the history of Tennessee before 1800. During the Civil War, Ramsey supported the Confederacy and served as a Confederate treasury agent. He had a long-standing feud with the pro-Union editor of the Knoxville Whig, William “Parson” Brownlow. One of Ramsey’s sons, who was Confederate States District Attorney of Knox County during the war, had Brownlow arrested for treason, and Brownlow was forced into exile. Later, as governor of Tennessee, Brownlow ordered Ramsey’s arrest, but Ramsey secured a pardon from President Andrew Johnson. The Ramsey Family Papers includes legal, financial, and personal papers and extensive family correspondence dated from 1790 to 1912. The historic Ramsey House in East Knoxville, now a museum, was the family’s ancestral home.

Pack of Philip Morris cigarettes, memento of World War II (Edwin Best Collection, CSWS.0163). Cigarette consumption in America soared during World War II. Popular culture glamorized smoking, and the military made cigarettes cheaply available to soldiers. The daily K-ration for combat troops even included a four-pack of cigarettes at each meal — breakfast, supper, and dinner. An unopened pack of Philip Morris cigarettes is one of the wartime mementos donated to UT’s Center for the Study of War and Society by the family of World War II Army ordnance officer Edwin Best. Best was a member of the United States Army 6th Engineer Special Brigade, 618th Ordnance Ammunition Company, an amphibious force that participated in the Allied invasion of Normandy at Omaha Beach in June 1944. In addition to personal memorabilia, the Edwin Best Collection includes maps of Omaha Beach and other military documents.

Plaster casts of the hands of three pianists (Galston-Busoni Archive, Manuscripts Collections, MS.1072). Our manuscript collections include an extensive archive of some 1,500 musical scores assembled by the pianist Gottfried Galston (1879–1950) to document his career and that of his mentor, pianist-composer Ferruccio Busoni (1866–1924). Among the memorabilia included with the collection are plaster casts of the hands of Galston, Busoni, and the 19th-century virtuoso pianist Anton Rubinstein. The practice of making hand casts of famous pianists arose in the 19th century, during the Romantic era of Western classical music. Casts were taken of living pianists and sometimes at the time of death to commemorate a great musician. When Frédéric Chopin died in 1849, the sculptor August Clésinger was called to his bedside to take both a death mask and a cast of his left hand. The cast of Anton Rubinstein’s hand also was taken after death.