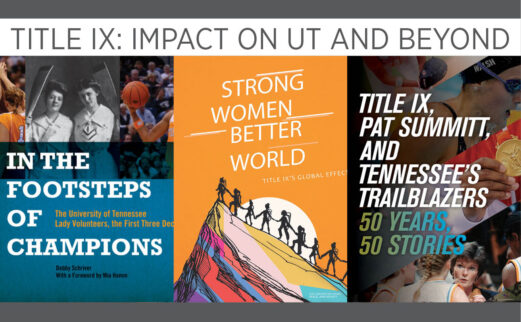 Panel Discussion: The Power of Sports and the Impact of Title IX
by Martha Rudolph
November 16, 2022  •  10 minute read

This year marks the 50th anniversary of Title IX, the law enacted by the US Congress in 1972 that prohibits sex-based discrimination in any education program that receives funding from the federal government.

“No person in the United States shall, on the basis of sex, be excluded from participation in, be denied the benefits of, or be subjected to discrimination under any education program or activity receiving Federal financial assistance.”
[Title IX of the Education Amendments of 1972]

On November 10, the University of Tennessee Press hosted a panel discussion called “Title IX: Impact on the University of Tennessee and Beyond.” Ashley Blamey, UT’s Title IX coordinator (responsible for overseeing university compliance with that statute), moderated the discussion. The panel included three authors whose books address the impact of Title IX and the power of sports to change women’s lives.

Debby Schriver, author of In the Footsteps of Champions: The University of Tennessee Lady Volunteers, the First Three Decades, noted Title IX’s unanticipated consequences on women’s sports. “I was really fortunate to interview Birch Bayh, who is the senator who sponsored the Title IX bill.… He told me about his struggles with Congress to pass this. He said what they didn’t expect was the explosion in athletics.” The 150 pages of the Education Amendments of 1972 were all about equity in education. “They were looking at educational programs — engineering, architecture, math, sciences — the programs that did not open themselves to women, in the professions that were not open to women, really, at that time.” No one anticipated that the law would lead to a revolution in women’s sports.

The Education Amendments of 1972 guaranteed that girls and young women would have equal opportunity in education — which included school-sponsored sports. High schools and colleges began to add women’s athletics departments and provide substantial funding. Federally-funded schools were ordered to be in compliance with Title IX by 1978, and in 1976 the University of Tennessee created a separate Women’s Athletics Department. Over the succeeding decades, athletes, coaches, and university administrators helped to reinterpret and strengthen Title IX.

“What I realized was that there was such a fine line for this first generation — that they really had to walk a tightrope,” said Mary Ellen Pethel, author of Title IX, Pat Summitt, and Tennessee’s Trailblazers: 50 Years, 50 Stories. “They had to cultivate relationships. They had to pick their battles.… On the one hand, they had to show that women’s athletics were not going to challenge men’s sports or compete with men’s sports. But, on the other, they had to show that women’s sports were worthy of respect and recognition.”

Thanks to Pat Summitt and many other trailblazers, Tennessee became a national leader in advancing women’s sports. As Blamey remarked: “You work here, and you live in Knoxville, and you get desensitized to the impact of the University of Tennessee. And one of the best parts about working here is that you get reminded periodically: What an amazing place to be!”

Pethel said that one of the questions she tried to answer in her book was: “Why Tennessee? Why did Tennessee emerge as a national leader in women’s sports? And it predates Pat Summitt, because it really begins with two organizations.” One was the Nashville Business College women’s basketball team, which, as part of the semi-pro/semi-collegiate AAU league, won eleven national championships and two world championships in the 1950s and ’60s.

The other was the legendary Tennessee State University Tigerbelles Women’s Track Club. “They won Olympic medals from 1952 to 1984 in every Olympics except for ’80 (which, of course, was the boycott). In total, they won 23 medals in those years. And they’re still the most successful track program in not only the history of the state but, I believe, in the country.” The most famous Tigerbelle Olympic champion is probably Wilma Rudolph. “And the last TSU Tigerbelle to win a gold medal was Chandra Cheeseborough in 1984. If you get a chance, go to YouTube and just Google ‘4×400 women’s relay, 1984 Olympics.’ She’s the anchor leg. And if you don’t get chills watching that race…! It’s just amazing.”

“You give one generation, one full generation, the protections and the opportunities afforded by Title IX,” Pethel said, “and you end up with what they call the Title IX Olympics with soccer, softball, basketball, track and field, gymnastics, all winning team gold. You see the advent of the WNBA.… That’s where you can really see the longer arc of history.”

Sarah Hillyer, a contributor to Strong Women, Better World: Title IX’s Global Effect, talked about the power of sport to transform lives and communities around the world: “Even if we don’t believe the same or speak the same language or share the same culture, all of a sudden when we step onto a basketball court or a soccer field or a tennis court, we have this commonality immediately. There’s a bond; there’s a mutual respect.” With funding from the US Department of State, UT’s Center for Sport, Peace, and Society uses sport as a tool to empower women and girls around the globe.

“In other countries, their sports systems are completely different than ours. It’s a club system; it’s a professional system; it’s not built within education.… Title IX is not relevant within their cultural context. But they are taking the lessons of Title IX … trying to change policies and laws and using sport … to advance gender equity.” Strong Women, Better World — written and illustrated by young women who have benefited from the CSPS’s mentorship program — recounts some of their successes. “Every single one of these women was the first in their country to do something. So, the first chapter is Ilina Arsova from Macedonia. She became the first Macedonian woman to climb all seven of the world’s highest summits.” Another is the first ever female sports journalist in Mexico. The Center for Sport, Peace, and Society is truly witnessing the global ripple effect of Title IX. “Social change,” Hillyer said, “is a team sport.”

Read these books, all available from the University of Tennessee Press, to learn more about women’s sports at UT from the 19th century to the present day. And watch the video of our event to hear more tales of Tennessee’s legendary athletes and coaches: How back in the 1970s coach Pat Summitt, herself, would sweep the gym floor before and after each basketball game. How Joan Cronan (director of women’s athletics at UT for nearly 30 years) used her charisma and wit to win over one of the men’s athletics directors who was dead-set against the women getting expanded locker room space in Thompson-Boling Arena.

Both Schriver and Pethel expressed their gratitude to Joan Cronan for putting them in touch with Tennessee’s pioneering women athletes whose stories fill their books. “I was so lucky because I got to be a fly on the wall,” Schriver said. “Joan Cronan gave me full access to do this book. So, I was in locker rooms. I was five in the morning with the rowing team out on the Tennessee River.” “I think we could all speak to the power of Joan Cronan,” Pethel said, noting that “her chapter is aptly titled ‘Good for the Game,’ because that’s what she did. She really recognizes the greater sense of community.”