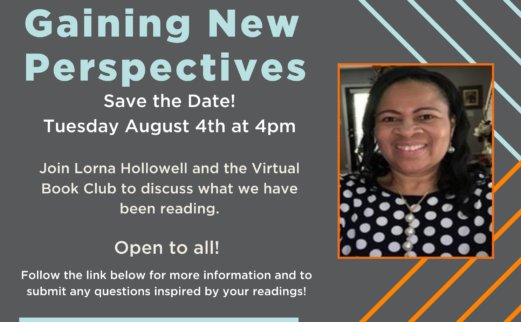 Seeking a way to keep students engaged over the summer, the UT Libraries and the Center for Student Engagement joined forces to launch a Virtual Book Club that helped all participants examine and understand different perspectives.

Rather than designating a single title to be read by all, our book club chooses a topic and provides a suggested reading list. In addition, participants are invited to read any book that falls under the chosen theme. The theme for the first session was Gaining New Perspectives, and suggested readings focused on anti-racism and intersectionality.

Reaching out and reconnecting with students who were isolated at home due to the pandemic was the chief reason for creating the Virtual Book Club. So it was important for students to have easy access to readings while sheltering in place. Librarians scanned numerous reading lists to identify books on the selected topics then cross-referenced titles against the libraries’ e-book holdings. Thanks to the UT Libraries’ investment in electronic resources, students have access to over a million e-books. No problem finding relevant titles!

Participants had about a month to read a book of their choosing before the Virtual Book Club gathered for an online roundtable discussion regarding gaining new perspectives. Lorna Hollowell from UT’s Division of Diversity and Engagement led our roundtable discussion on anti-racism and intersectionality. A number of faculty and staff members from different campus departments shared with the group how the books they had read opened their minds to new perspectives.

One participant gained a new perspective by reading The New Jim Crow: Mass Incarceration in the Age of Colorblindness. She was already convinced that the prison pipeline and mass incarcerations demand criminal justice reform on a national scale. But reading the personal stories in The New Jim Crow made her acutely aware of the intolerable impact on both individuals and on our society.

Another reader found personal affirmation in I’m Still Here: Black Dignity in a World Made for Whiteness. She had read other works written from the perspective of a black theologian, but this book felt especially fresh and intimate — as if the author were reading her mind and recounting her personal journey. “It was very relieving to find that kinship in a book.”

Hollowell asked if anyone had experienced an emotional reaction to what they read. The question inspired an exchange about code switching and the pressure felt by many people of color to switch between separate personalities and to use different language when moving between different cultures.

The book that sparked the conversation was The Hate U Give, Angie Thomas’s novel about a teenager who witnesses the fatal shooting of a childhood friend at the hands of police. Starr Carter is a 16-year-old black girl from a poor neighborhood who attends a predominantly white elite private school. Moving between two worlds, she inhabits two different identities and, essentially, speaks two different languages. As the only witness to the shooting, she is intensely aware that how she speaks publicly of that incident will have repercussions in both of the worlds she inhabits.

Several roundtable participants spoke of the stress they feel in their daily lives, trying to maintain separate identities. “As we are moving from one community to a different one, we need to change. Sometimes it’s called code switching because we behave differently, we speak differently.…We do this all the time; we don’t even realize it. Star says, ‘Being two different people is exhausting.’ I agree.”

Another person added, “It’s not really who you are; it’s more of a false face that you have to put on in order to be successful in society. And, in some ways, it does start eating away at you.…There’s always this tension that I think all human beings have. But within the black experience in America it’s uniquely different.”

“It is a coping mechanism.…Sometimes it is a matter of survival.…Was it Paul Laurence Dunbar who said, ‘We wear the mask’?” Hollowell concluded, invoking the compelling 19th-century poem.

The group went on to talk about several recent books on anti-racism, such as Ibram X. Kendi’s How to Be an Antiracist and White Fragility by Robin Diangelo. Hollowell posed this question: “Anti-racist literature often speaks about the importance of action. What did you learn in your readings that you want to incorporate into your daily life? And how do you plan to take action?”

Quoting from White Fragility on surviving racism in the workplace (“Remember, you are a creative being who is capable of making change. But it is not your responsibility to transform an entire organization.”), one reader said of her own evolution on that subject: “Being a black kid growing up in America and sometimes being the only one in certain spaces that I inhabit, you feel like the onus is on you to correct everybody, to be the teachable moment, and to tell the whole history of America’s enslavement.…And as I have grown up, I realize that I cannot do that.… I guess the action for me is allowing myself to fully embody that creative spirit within myself but also understand not to rush to take on that full responsibility of changing that organization. I can be a part of the change, but I don’t have to bear that whole burden.”

“When I read White Fragility … one thing that really changed my perspective is that racism is a systematic issue, which I think is both enlightening but also can feel very overwhelming,” another offered. “I should also acknowledge that that is part of my privilege as a person from the dominant culture that I can feel that way, that it just feels overwhelming.”

On the subject of microaggressions, Hollowell reminded the group that students from minoritized populations are facing all the obstacles created by systemic racism along with all the other everyday obstacles students face: homesickness, managing their money, managing their time, roommate problems, etc. “It’s amazing that there are all of these layers that marginalized individuals have to deal with on a daily basis in the midst of this system built to oppress them, to hold them down, and to shut the doors of opportunity.”

One participant spoke of having the courage and determination to confront family members or friends who express racist, sexist, or homophobic views. “A lot of the things I’ve been reading really enlightened me: if you’re being silent, you’re being complicit.”

Hollywell repeated the late US Representative John Lewis’s admonition: we have to be willing to get into “good trouble.” When we are outspoken advocates and allies, sometimes the cost is great.

Kimberlé Crenshaw, who created the term intersectionality, defined it as “a framework for understanding the ways that multiple aspects of our identities intersect, how they influence one another, and compound to create unique experiences.”

Discussing intersectionality, the group noted that many aspects of a person’s identity — such as mental health struggles — are things you can’t see. If someone is unable to conform to societal norms because of unseen factors, others often attribute that person’s behavior to visible traits of race or gender.

Noting that we are in the midst of both a racial pandemic and a COVID-19 pandemic, Hollowell asked the group if anything they had read gave them hope-along with new perspectives. One reader recommends biographies: “Just looking at the ways that people throughout history have overcome their situations when faced with adversity — whether it had to do with race or gender or intersectional identities — I’ve just been finding inspiration in their journeys.”

Ernest Brothers, associate dean of the Graduate School, offered a concluding note of hope. “To everything there is a season. And seasons eventually pass. But it’s what you’re doing in the season.…In times of chaos and stress, you have to find a unique place where you can just be still, and be still in the moment. Because there are just some things that are simply beyond our control.… So, all of us are being challenged in ways that we never anticipated. We’re being challenged mentally, physically, spiritually, socially.…But it’s also a time of growth because we’re seeing now that we’re being able to do things we never thought we’d be able to do.”

A recording of this event can be found on the UT Libraries YouTube channel or can be watched below.