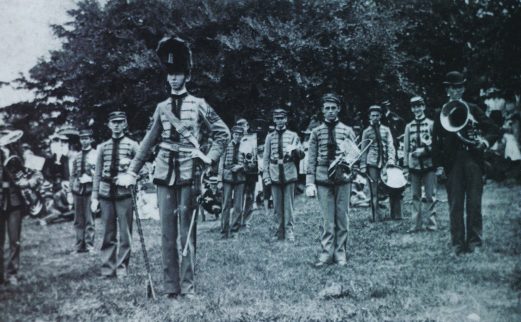 The University of Tennessee Marching Band, better known as the Pride of the Southland, is one of the oldest and most prestigious collegiate band programs in the country. The band celebrates its 150th anniversary in 2019.

Organized following the Civil War, in 1869, the band was originally part of the Military Department on the Knoxville campus and comprised a small corps of male cadets. Initially an all-cornet ensemble, the marching band featured a drum major and was directed by a student cadet leader.

The cadet band really started to take shape in 1871 with the appointment of the university’s first professor of music, Gustav Knabe, a graduate of the famous Leipzig Conservatory. Under Knabe, the cadet band grew in numbers and began performing for commencement and other collegiate activities across campus. In 1892, the band was reorganized and Ernest H. Garratt, an experienced musician who served as UT’s organist and Glee Club director, was named the first official bandmaster.

Another change came at the turn of the century, when William A. Knabe, son of Gustav Knabe, took over leadership of the band. He held the position of bandmaster until his death in 1914. Under William Knabe’s leadership, in 1902, the band made its first appearance at a football game, a contest between UT and Sewanee. With the support of the band and the cheering fans, UT prevailed, 6–0.

Following Knabe’s passing, the band searched for a new leader, eventually appointing William Crouch as the third bandmaster in 1917. Under Crouch’s direction, the band doubled in size to 30 members, wore surplus World War I uniforms, and routinely played at football games. Some members marched in the band and played on the football team.

The marching season of 1920 got off to a particularly rocky start at Wait Field. As the band readied to perform, the section of the bleachers they occupied collapsed, and some members slid down the hill unceremoniously. Luckily, no one was hurt, and the band played from the sidelines in borrowed chairs.

The band continued to grow, by 1925 numbering more than 80 members. The fourth bandmaster, Ernest Hall, who joined the program in 1925, ushered in several changes. The band added a female drill team, the Volettes; introduced a new fight song arranged by Hall, “Fight, Vols Fight!”; and in 1939 named the university’s first majorette, Mildred Alexander. Hall also broke new ground by inducting the first female musicians into the marching band: Martha Carrol and Peggy Calloway on the lyre and Marjorie Abbott on the marimba. In 1939, the band made its first appearance at the Orange Bowl.

Major Walter Ryba became UT’s fifth bandmaster in 1941. Ryba, a former French hornist with the famed John Philip Sousa Band, served for two decades as UT’s band director. Under Ryba’s direction, the band increased its enrollment and introduced themed halftime shows with guest artists. In January 1953, the band marched in the parade at President Dwight D. Eisenhower’s first inauguration. It was during Ryba’s tenure that Knoxville Journal sports editor Ed Harris, in his November 1, 1949, “Top o’ the Morning” column, dubbed the band the “Pride of the Southland.”

Between 1949 and 1959, the marching band was again an all-male preserve. In 1960, after 91 years as a component of the ROTC program, the band was moved administratively into the Department of Music Education and then the Office of the Chancellor.

A National Reputation and New Traditions

With Ryba’s retirement at the end of 1960, a new era in the band’s history began. For the next three decades, the Pride of the Southland Band, under the direction of the sixth bandmaster and director of bands, W. J. Julian, grew substantially in numbers, musical ability, and complexity of marching drills. Julian’s vision, organizational skills, teaching abilities, and unwavering pursuit of excellence enabled the transformation of a military band into a nationally prominent university marching band.

During his first year, Julian changed the band’s look. Bright orange coats replaced the old stiff black-and-cream coats trimmed in orange, and new hats mirrored the shakos of the band color guard. These same uniforms remain a standard for the band today. In fact, many of today’s most beloved traditions began during Julian’s tenure. Julian, with the help of head football coach Doug Dickey, instituted the pregame ritual of running through the T. Well known for his innovative style, Julian also developed the now-iconic Circle Drill, a unique routine that is one of the most difficult in the country. UT’s unofficial fight song, “Rocky Top,” first debuted as part of a tribute to country music during the band’s halftime show at the October 21, 1972, Alabama game. Julian established the first band scholarship and initiated the Over the Hill Alumni Band, composed of band alumni who perform at the Homecoming game each year.

Julian finished his remarkable career in 1993 after guiding the Tennessee band program for 32 years and garnering many local and national accolades. He had a flair for creating exposure for the band program. With guest performances by notable artists and more than 50 television appearances, the band gained national acclaim during Julian’s tenure.

The W. J. Julian Professorship of Bands, the first endowed professorship in the history of the UT School of Music, was established in 2010 in honor of the legendary marching band director. Gary Sousa, who was UT’s bandmaster from 1997 to 2013, was the first recipient of the professorship.

Management of the band returned to the School of Music in July 2013, the same month that the school moved into the new Natalie L. Haslam Music Center. In 2013, Donald Ryder, conductor of UT’s Symphonic Band, was made interim director of bands. In 2015, Ryder’s appointment was made permanent, and he became the 10th director of the Pride of the Southland Band and the second W. J. Julian Professor of Bands.

Under Ryder’s leadership, the band started a new tradition with the football team, the Circle of Life, as a part of the team’s warm-up on the field. In January 2017, the Pride of the Southland Band marched in the inaugural parade for President Donald Trump. The band played “Rocky Top,” “Down the Field,” and “Fight, Vols, Fight!”

Over its 150-year history, the Pride has marched in 15 inaugural parades—more than any other civilian organization—and has appeared at more than 40 bowl games. What began as a small all-male military band has grown to a university marching band of more than 300 members, known worldwide for its outstanding musical performance and precision marching.

The band’s rich history and long-standing traditions are documented in the UT Marching Band Collection at the University of Tennessee Libraries. The newly available collection holds historical material dating back to 1901. The archive contains newspaper clippings, awards and certificates, drill charts and scripts, and unique band memorabilia. Highlights of the collection include a wealth of photographs and audio and video recordings of band performances. Recordings include pregame and halftime shows at regular season football games and bowl games as well as special performances. These and many other historically valuable records of the University of Tennessee are preserved in the Betsey B. Creekmore Special Collections and University Archives.