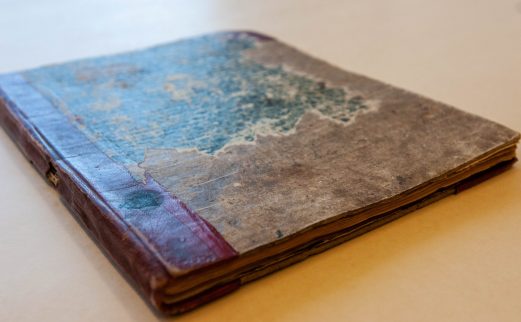 Rare Books and Manuscripts on the Cherokee
by Martha Rudolph
November 13, 2019  •  7 minute read

Scholars of Cherokee history will find abundant research material in the Betsey B. Creekmore Special Collections and University Archives. Our special collections contain nearly 700 items concerning the Cherokee, including many items that date from the decades prior to the Cherokee’s forced removal on the Trail of Tears. The following one-of-a-kind documents from our manuscript collections attest the unsettled relations between the Cherokee and their neighbors in the late 18th and early 19th century.

Letter from John Sevier to the Honorable M. Smith, October 30, 1792 (MS.3231). Sevier notes the region’s escalating hostilities with the Creek and Cherokee nations and asserts his belief that war is inevitable.

Receipt of bounty for the return of stolen horses, 1797-1798 (MS.2390). Contains a list of goods, including a rifle, powder, and cloth, given to two Cherokee Indians in exchange for the return of ten horses stolen from the Creek Nation.

Letter from Sampson Williams to Colonel David Henley, December 1798 (MS.1957). In this letter to one of the War Department’s Indian agents, Williams reports a number of robberies that he believes were committed by Cherokee Indians.

Letter from Senator Joseph Anderson to Secretary of War James McHenry, ca. 1800 (MS.3306). The senator complains that numerous white settlers have been expelled from their land because the government has incorrectly surveyed the boundary with the Cherokee Nation.

Letter from James Robertson to Return Jonathan Meigs, November 12, 1802 (MS.0367). Robertson writes to Colonel Meigs, an agent to the Cherokee Nation, to verify that Culsetehe, a Cherokee, has had a horse stolen by a white man and should be reimbursed.

Letter from Governor John Sevier to Colonel Return Jonathan Meigs, August 12, 1805. From the John Sevier Collection (MS.1941). Governor Sevier states that “the Cherokee have committed a very daring insult, and . . . it can not be passed over in silence” and asks to have his letter placed “before the Chiefs, in order that their answer may be obtained as speedily as possible.”

Letter from Return Jonathan Meigs to John Strothers, April 14, 1812 (MS.2039). Meigs expresses his concern that the Cherokees’ rights are being violated by the US government over land grants.

Letter from Gideon Morgan to John C. Calhoun, August 16, 1820 (MS2386). Morgan expresses his desire for the successful conclusion of a treaty with the Cherokee and mentions money owed to him by the Cherokee Nation.

Letter from John Ross to Edward Gunter, November 1, 1834. From the John Ross Letters (MS.1006). The letter authorizes Gunter to hire James W. McClung to defend the rights of the Cherokee Nation, even to the Supreme Court. John Ross was Principal Chief to the Cherokee Nation from 1828 to 1839.

Diary of a disbursing agent for removal of the Cherokee Indians, 1834–1838 (MS.3879). The diary follows the agent’s travels through the southeast in the time leading up to the Cherokee removal and documents his interactions with the Cherokee people.

The titles of certain early 19th-century monographs in our rare book collection provide a ready summary of the campaign to expel the Cherokee from their lands. For example:

Other rarities among our historical materials on the Cherokee are antique maps such as A New Map of the Cherokee Nation with the names of the towns and rivers they are situated on (London, 1760?); a near complete run (1829–1834) of the dual-language newspaper, the Cherokee Phoenix; early 19th-century Cherokee-language hymnals and Scriptures; and TSVLVKI SQCLVCLV: A Cherokee Spelling Book, printed in Knoxville for the Brainerd Mission near present-day Chattanooga. The UT Libraries’ copy of the speller is one of only three copies known to remain from the 1819 printing.