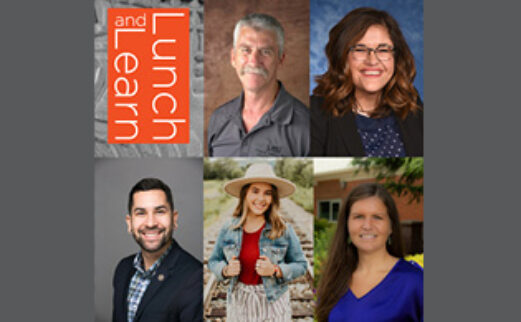 We are in the throes of a national reckoning on racial and ethnic injustice. On October 8, the UT Libraries and the Native American Student Association joined the public dialogue by holding a virtual panel discussion on present-day issues affecting Native Americans titled Reflecting on our Foundations: Native Stories and Voices.

Jerry Roberson, professor of Food Animal Medicine and Surgery in the College of Veterinary Medicine at Lincoln Memorial University (LMU), served as moderator. Other panelists were: Heather Hall, a master’s candidate in College Student Personnel and a graduate research assistant in UT’s Office of Multicultural Student Life; Joseph Owle, Secretary of Agriculture and Natural Resources for the Eastern Band of Cherokee Indians; Robin Reed, a chemistry major at LMU; and Natalie Welch, professor of Sports Management at Linfield University. All panelists have Indigenous ancestry; most are enrolled members of the Eastern Band of Cherokee Indians (EBCI) or the Cherokee Nation of Oklahoma.

Roberson began the conversation by asking panelists, “If you wanted the public to know something about Native American communities and nations, what would it be?”

“That we’re still here!” Owle said. Misled by a romanticized view of Native Americans perpetuated by the schools, many members of the public seem to believe that America’s indigenous peoples are “extinct” — or at least totally assimilated into the dominant culture.

Hall wishes people would take the time to learn about the Native nations that once inhabited the areas where they now live. For those of us living in the Southeast, the Native nations who preceded us were once known as the Five Civilized Tribes. During the Indian Removals of the 1830s, the Chickasaw, Choctaw, Cherokee, Seminole, and Muskogee (Creek) were subjected to forced migration from their ancestral homelands to lands west of the Mississippi. An estimated 4,000 Cherokees died on the infamous Trail of Tears.

Many institutions in the US and Canada have adopted land acknowledgements, statements that formally recognize our colonization of traditional Native territories. “Even UT is on traditional Cherokee land,” Welch said.

“Cultural knowledge of different tribes could be taught in school,” Reed said. Instead, schools present a monolithic and stereotypical view of Native nations. One misconception is that all Native communities live in dire poverty. Professor Welch, who grew up on the Qualla Boundary, pointed out that the EBCI had completely financed her education.

Roberson next asked, “What kinds of stories or narratives about Native Americans need to be changed in Tennessee, particularly East Tennessee?”

Hall stressed that it is important “to tell accurate stories from the perspectives of Native people. Who is telling the story matters.” She decried the false narrative of “white saviorism.” Rather than acknowledging that European settlers decimated thriving Indigenous populations and stole their traditional homelands, a vague notion persists that a primitive and inferior people were somehow “saved” — possibly a relic of the 19th-century doctrine of Manifest Destiny.

“What does good allyship or being a good accomplice look like to you?” Roberson posed.

“Having a desire to learn,” Reed said. “Don’t cling to stereotypes.” “Elevate Native voices,” Hall admonished. “Don’t speak for them.” But, Welch opined, “don’t tokenize us. I can only speak for myself, from my own personal experiences, not for my tribe — much less for other tribes.”

Owle encouraged allies to be aware of current issues affecting different tribes. Just a few days before our panel discussion, the Environmental Protection Agency had granted the state of Oklahoma wide-ranging environmental control over nearly all tribal lands in the state, stripping tribes of their sovereignty over environmental issues such as dumping of hazardous chemicals.

This led to an audience question about how COVID is affecting Native communities. Owle reported that Native communities have experienced higher mortality rates than the general population. Welch noted that the pandemic reveals disparities in wealth and access to health care and other resources. The Navajo Nation has been particularly hard-hit by the coronavirus, in part because of a lack of access to safe, running water — highlighting the importance of tribal water rights and Native sovereignty over infrastructure on tribal lands.

Roberson asked panelists whether they had any final takeaways for the audience.

Panelists made an appeal for meaningful education about America’s Indigenous peoples and their diverse cultures, especially in primary schools. Even panelists who had grown up in Native communities acknowledged that they had received no substantive instruction on their own history until high school.

Each of the panelists again encouraged audience members to research the Native peoples whose homelands once occupied the geographic area where they live. Hall suggested seeking out publications written by Indigenous scholars. Owle recommends The Rights of Indians and Tribes, by Stephen Pevar, which provides a clear explanation of tribal sovereignty and an excellent guide to federal Indian law.

Welch reminded us that Native Americans were the original climate-change fighters and that we are “stewards, not owners of the land.” The imperative for environmental stewardship is perfectly captured in the proverb “We don’t inherit the earth from our ancestors; we borrow it from our children.”

The UT Libraries’ Diversity Committee hosts an ongoing series of difficult conversations on topics related to diversity and inclusion.