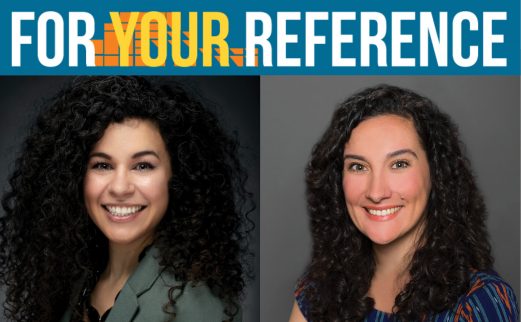 For Your Reference #3: Reproductive Injustice at the US–Mexico Border
by Martha Rudolph
April 13, 2021  •  13 minute read

Two scholars of reproductive justice were the featured experts for Episode 3 of For Your Reference, the UT Libraries’ discussion series on topics of current concern. Professors Leandra Hernandez (Department of Communication, Utah Valley University) and Sarah De Los Santos Upton (Department of Communication, University of Texas at El Paso) joined our virtual audience on March 10th for a conversation on the intersection of reproductive justice and human rights at the US–Mexico border.

“So, we should be thinking about what kinds of environments surround our communities, how to give agency to parents to stay with their children and not have their children taken away,” she said, referencing recent incidences of children being separated from their parents at the US–Mexico border.

Upton and Hernandez recently published an article on how violence against transgender women at the US–Mexico border is fundamentally a violation of reproductive justice. “When you’re fleeing, as is the case with many of the transgender migrants that we were discussing in this article … When you are fleeing a country because it is unsafe to be who you are and identify the way that you identify and just live freely, you should be able to come and seek asylum and be protected instead of criminalized,” Upton continued, “…instead of put into unsafe conditions in ICE detention centers. And, so, we really need to think about reproductive justice really broadly.”

“Studies show that LGBTQ+ migrants are among the most vulnerable. They’re more likely to be assaulted and killed than cisgender migrants. Eighty-eight percent of LGBTQ migrants are victims of sexual and gender-based violence in their countries of origin,” Hernandez said.

Among other issues, Hernandez and Upton’s recent article on the rights of transgender women addressed the media’s inept and sensationalist reporting about two migrant transgender women who died in migrant custody after being denied medical care. “Journalists have a responsibility.… Not all witnessing is the same,” they told our audience.

“When we look at media coverage … the way that we choose to frame stories — what headlines, what descriptive terms we’re using in the stories — plays a role in how audiences receive those stories,” Upton said. ”I think that by taking a communication lens to these issues we can really help to uncover some of the problematic framing of these issues in media representation. But then we also play a role in coming up with terms. Something that I love to share with my communication students when we’re talking about the topic of sexual harassment is: You know this term didn’t used to exist. So, this behavior always existed. People experienced these things in their workplaces, but they didn’t know what to do about it because there wasn’t a name. There wasn’t a term that they could kind of rally around to describe this experience. And then when the term is coined, it is powerful. You can make laws about it; you can file complaints about it; you can be trained on how not to do this.”

Upton said that growing up in the US–Mexico borderlands shaped her approach to the topic of reproductive justice. “I was born and raised in El Paso, and so I feel a very deep connection to the border itself. It shapes who I am in the world, how I see the world, the way I approach scholarship.… I was here when Customs and Border Protection and ICE were just dropping people off in the middle of the street on Christmas Eve to try to create a spectacle and a crisis, a media crisis, so that they could paint this picture that migrants are here taking over the streets of El Paso — when you know, being from a border community that is welcoming to migrants and flourishes because it’s a migrant community … I know that that’s not the case.”

In the second part of our virtual event — a segment we call “Check This Out” — humanities librarian Shaina Destine joined our host, media literacy librarian Paris Whalon, to discuss library resources available for researching transgender rights.

“What people don’t often realize is that access to all information isn’t equal,” Whalon pointed out. “It’s really on us to make that more accessible, because if things are behind a paywall or if folks don’t have access to a laptop … there’s already a kind of information poverty,” Destine added.

“What resources does UTK Library have for those who want to learn more about the LGBTQ+/Latinx experience at the US–Mexico border, specifically?” Whalon asked. Destine mentioned several databases that are good starting points for research. She particularly likes the Women’s Studies International database and LGBTQ+ Source — in part because those databases are good sources of related search terms. A search on “transgender” brings up the alternate term “gender non-conforming.” “Migrant” also yields sources on “refugees,” “displaced persons,” and “asylum seekers.”

Relevant sources identified by a search of LGBTQ+ Source included articles about housing transgender females with women rather than in the men’s facility (where they experience a high rate of sexual assault) and articles about suits against the US government for wrongful detention or deportation.

“What resources outside of the library are available to [those] who want to engage in this conversation or be an active participant fighting against inhumane treatment at the border?” Whalon asked. Destine suggested seeking out national organizations such as the National Center for Transgender Equality, Human Rights Watch, and the Transgender Law Center. Also, the website for the group Not One More Deportation provides a list of about 50 actively engaged grassroot organizations. This is not, of course, an exhaustive list of sources. ”We just want to give you a breadcrumb so you can start,” Destine said.

Whalon reiterated points made by Hernandez and Upton in their conversation: “Headlines can be super inflammatory and misleading.… Evaluate the source … before you share it.… The media can also be super harmful, especially, to victims of violence who may be transgender, non-binary, or gender non-conforming.… Whenever news outlets race to be the first to present information to the public, they may use victims’ ‘dead names’ and misgender them, which is a super painful experience.”

To evaluate news sources, the librarians even recommended simply Googling the source or reading the Wikipedia article to assess whether the source has a particular bias or approaches the topic from the standpoint of a particular ideology. Social media can be a great place to find information or to identify like-minded people who support causes of interest to you — but “flex your info literacy skills beforehand!” Destine warned.

For our “Stories From the Stacks” segment, manuscripts archivist Laura Romans joined Ingrid Ruffin to talk about how we are diversifying the collections in UT’s Betsey B. Creekmore Special Collections and Archives. Romans explained that special collections and archives are the primary sources of history. Often, institutions have chosen to preserve only a small slice of our history. The history of marginalized communities has not been documented, or the way collections have been described is problematic. “Working to diversify our collections can mean a lot of different things,” Romans said. “One way we can do that is to look at the collections we have and re-examine them. Who is here? Who’s present from marginalized communities that just haven’t been brought to light … their voices haven’t been heard? And let’s try to make them heard, make them more visible. And then, of course, growing our collections and developing more representative collections that are truly showcasing the full spectrum of history, the full spectrum of our culture and our region.”

The librarians discussed some of the more unusual items in our special collections, as well as some of the ways — other than traditional scholarship — that researchers use our special collections. This includes the UT Libraries’ project Boundless: Artists in the Archives. “It’s a really great project,” Romans explained, “where we invite musicians — so far it’s been musicians… We invite them in; they look at a particular collection or maybe a theme across some collections; and then they use it in different ways — however the material inspires them to create music. And we’ve had everything from an Americana band to a jazz artist. That’s a unique and exciting way that people can come in and use these primary sources.”

Ruffin asked what people should do if they have unique and interesting materials they would like to donate to the library. Do not, Romans stressed, bring unsolicited materials to the library! “We are definitely open to having conversations with people who think they might have something that fits into what we collect, things that fit our collection mission and our priorities,” Romans said. She encourages people to visit the Special Collections website, lib.utk.edu/special. “That’s where you can learn everything you’d want to know about Special Collections — but especially about the types of material that we collect and how to get in touch with us. If somebody is interested in starting that conversation, we’d love to do it.”