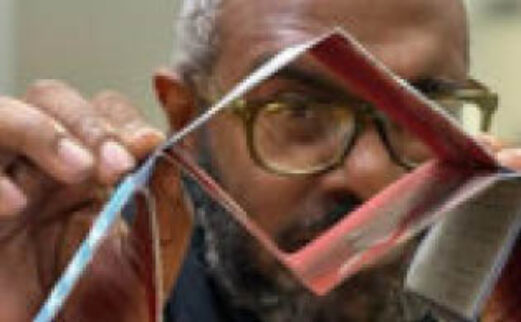 This spring, the UT Libraries welcomed guests back to the John C. Hodges Library for two in-person events in the Lindsay Young Auditorium.

The fourth session of Boundless: Artists in the Archives, on March 31, featured local hip-hop and spoken word performer Black Atticus.

The UT Libraries created the Boundless series to demonstrate that the unique materials in our special collections not only inform scholarship but can also inspire creative work.

When we invited Black Atticus to delve into the Betsey B. Creekmore Special Collections and University Archives, he was especially inspired by materials in the Dr. C. S. Boyd Photograph Collection. That collection consists of photographs of African Americans in the Knoxville area during the early 20th century, including many photos of Dr. Charles S. Boyd, his dental office, and his family. In addition to visiting our archives, Black Atticus explored collections at the Beck Cultural Exchange Center.

From his research in the archives, he wove together verbal imagery of local Black history and culture for an original song, “Seed 2 Sun,” created just for our Boundless program. During a discussion following the performance, Black Atticus told the audience that he was especially moved by the historical record of Black Knoxville communities lost to “urban renewal,” and he expressed his gratitude to the Beck Cultural Exchange Center and the UT Libraries for documenting and preserving the history and cultural heritage of the local Black community.

Listen to the studio master of Black Atticus’s rhythmic wordplay:

On April 5, the University of Tennessee Press hosted a lecture and book signing with John E. Ross, author of Through the Mountains: The French Broad River and Time, and Robert Hatcher, emeritus professor of geology.

Ross spoke about the human settlements that have followed the French Board watershed. Then he and professor Hatcher explained how we have learned that the Appalachian Mountains are not “the world’s oldest mountain chain.”

In the popular imagination, the distinctive topography of the Appalachian Mountains is the result of a single upheaval 300 million years ago, followed by gradual erosion over the eons.

But, in fact, the Appalachians as we know them were formed by a complex choreography of repeated plate collisions, upthrusts, sinking, inundation, warping, erosion, and downcutting by ancient streams over a mere 5 to 10 million years. Hatcher outlined the geologic events that created the Appalachian Mountain chain. And he introduced the audience to some of the newer techniques that are refining our understanding of the sequence and timing of those events — such as dating the deposit of boulder fields by mass spectrometry of particles from the outer layers of rock debris.

Groundbreaking new research about our beloved mountains also appears in Through the Mountains: The French Broad River and Time, which updates Wilma Dykeman’s landmark environmental history, The French Broad, with two generations of scholarship that have revealed new facts about the watershed Dykeman knew so well. Through the Mountains is available for purchase from the UT Press.