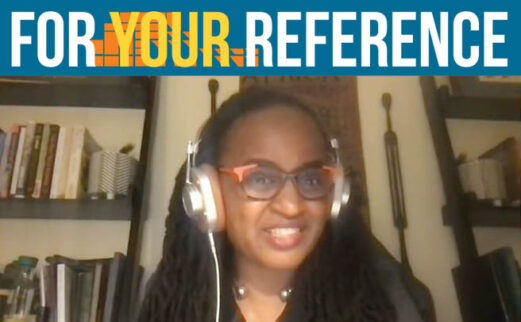 Stacey Patton on Mentorship, Storytelling, and the History of Black Childhood in America
by Martha Rudolph
April 4, 2022  •  8 minute read

Stacey Patton, an award-winning journalist and nationally recognized child advocate, was our guest on the March 17 episode of For Your Reference, the UT Libraries’ series of scholarly conversations. She joined us to address the question: What do history teaching, history telling, and academic mentorship need to do right now in our current moment?

Patton’s academic work focuses on the intersections of race, childhood, and corporal punishment, and on childhood in American history, including the horrible lynchings of children during the Jim Crow era. Outside of academe, she serves as a child advocate, working with clinicians, child welfare, and law enforcement. Patton currently teaches journalism at Howard University and is a research associate at Morgan State University — in addition to an earlier, storied career as a journalist.

Robin Bedenbaugh, head of marketing and communications at the UT Libraries and our emcee for the evening, began by asking our guest about her experience of seeking a mentor to guide her through her graduate degree program.

Patton had had in mind a research topic on the historical evolution of corporal punishment in African American culture. Entering grad school, she had a distinct idea of the ideal advisor — initially settling on two well-known African American women historians. But, for various reasons, it was not a good fit. “I got a lesson from another mentor, another famous African American male historian, who kind of chuckled, and he says, ‘You’re going to learn that the best qualified people don’t always share the same physiognomy.’ It was about who’s the best read, who’s capable of preparing you to make nuanced arguments, to find new insights, to create a document that has value to the profession, that’s going to add value to your marketability beyond your program, and help you do some cutting-edge scholarship.” She dumped her earlier mentors — and suffered significant backlash for doing so.

Patton ended up with a wonderful advisor who at first seemed like an unlikely fit. Professor Virginia Yans from the Rutgers history program is an immigration scholar who focuses mostly on the experiences of Italian immigrants. “We were an unlikely pair. Here I was, concerned about understanding, you know, African American childhood. So, at first, I’m thinking, what’s this white woman going to teach me about Black childhood.… I survived Black childhood. She can’t tell me anything.” But professor Yans taught Patton how to think and write like a historian.

Both as a historian and as a journalist, Patton has used the rare and unique primary sources in the archives — such as manuscripts, letters, photographs — for her research. “As a storyteller, I use archival records to make sense of the past, the present, and these historical echoes that we’re living with right now.”

For me, the archives have been a chamber of horrors.

“Because of the topics that I look at, which is really about the abuse of children … for me, the archives have been a chamber of horrors,” Patton said. She struggled with the emotional impact of what she was seeing in the archives. “My emotions were overriding my critical thinking about this stuff and clotting my ability to ask historical questions.” Patton would turn to her mentor in such moments. “She would always say, ‘You have the right to be angry, to call this ugly, to call it racist. But that’s not the story. There’s nuance and complexity in all of this.’ And, so, she pushed me to step away and then come back … look away, look at it again, look away again. Ask a different set of questions, and you start to see things more kaleidoscopically and nuanced. And, so, that helped. Being able to ask those intellectual questions helps me manage my emotions when I see really dark and ugly things.”

How does she remain objective when faced with dark historical truths? Another mentor, from Patton’s days as a journalist, taught her that “When you go into the archives, you’ve got to be quiet enough to let others speak.… Your job as a historian, your job as a storyteller, is to listen, just listen. What are the documents telling you? What are these people telling you from their own voices, their diaries, their letters, you know, the editorials you’re reading in old papers…?”

When you go into the archives, you’ve got to be quiet enough to let others speak.

“One technique, though, I’m trying particularly with my next book because it’s so difficult — I need to find a way to invite people to take my hand and come watch the ugly, brutal, evil murders of children. So, they need me and my voice and my energy to help them go through that chamber of horrors. So, I want to say …  come sit down with me. We’re going to go back to some ugly scenes. … Let me show you this picture. And what do you think? So, I’m actually asking questions. So, it cuts, you know, some of that, you know, tension and emotion.”

Patton went on to talk about some misuse of the archives that she is witnessing. “What I’m seeing far too much happening in the academy — particularly in gender studies and some, you know, other topics around sexuality and race — is too much entrenchment and ideological thinking on things. There’s a lot of rigidity. People are bringing their traumas to the archives. Like, you gotta check that in the locker somewhere. Because their own personal, unresolved stuff is guiding, you know, how they go. And they look at, they read things onto the past that aren’t there. They put words into people’s mouths.… We’ve got to check our own traumas, our own unresolved stuff, and our own ideological motives sometimes so that we don’t distort the historical record.”