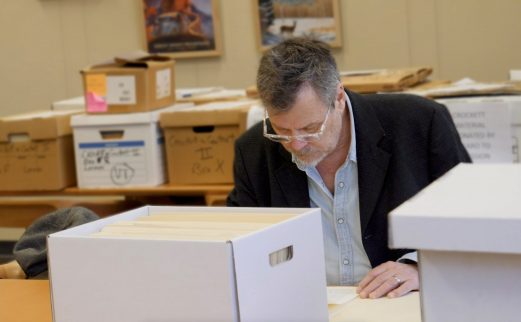 R. B. Morris — a singer, songwriter, poet, and author — was the second artist to participate in the UT Libraries’ program Boundless: Artists in the Archives. Inspired by materials in our Special Collections, Morris composed a song about writer James Agee and wrote an extensive essay on Agee’s autobiographical novel, A Death in the Family. Following is Morris’s statement on his artistic process. —Ed.

When I was offered the Boundless: Artists in the Archives assignment, it was to write a song after researching James Agee’s “papers” in Special Collections. I’ve had a long interest in Agee, but I had no inclination to write a song about Agee. I already had a song somewhat about him that was the title song of an album, and I had just that month performed the song for a small international film. I wasn’t looking to write a new one. My interest in Agee, of late, has been with the publication of “A Death in the Family”: A Restoration of the Author’s Text (edited by Michael A. Lofaro, UT Press, 2007). Reading the restored version of this novel after living my whole life with the Pulitzer Prize-winning original publication of the book was quite a revelation for me. This was something about James Agee that I wanted to consider further and write about. Because I had this interest in the two versions of Agee’s novel, I thought, as part of my assignment, I would also write and submit an “essay” on this subject. As I warmed up to the idea of a song and considered possible themes, I began to feel the song too might in some way come from this specific area of Agee’s life and work. This is how I came to write the song, “The Story of the World,” and the essay, “The Lost Ending of A Death in the Family.”

I found the many boxes of James Agee’s carefully catalogued notes, letters, journals, poetry, manuscripts, and other related materials fascinating and revealing and enlightening, although there was far more of it than I could begin to explore to any length. It enriched and piqued my interest in Agee. While I looked through the papers and materials Michael Lofaro referenced in A Restoration of the Author’s Text, the essay mainly relies on the research done by Lofaro for A Restoration and my own familiarity with the two versions of the novel. A Restoration already provides a thorough study of the two versions of the novel, their history, and what can be known of how they were edited. I will only be reflecting on what we have learned, the history, and the two versions. Both the original publication and the restored version tell the same story, but they are quite different in a number of ways. Michael Lofaro contends that the original publication was a “radically different book” than what the author intended. In the essay I discuss some of these differences as well as what has been learned about Agee’s writing of the book, and the first trustee of the Agee Estate, David McDowell, who edited the book. My personal life plays into this narrative to some degree, as I was born in the same Knoxville neighborhood as Agee and through my father’s interest attended the 1963 premier of the All The Way Home film held here in Knoxville. I have had a long and ever-changing relationship to the author and his work.

The song is not so specific to the subject of A Death in the Family but focuses more on “story” as a general theme. It does, however, draw from both versions of the book, as well as another piece of Agee’s writing, “Now As Awareness.” From all three of these works I have taken phrases or ideas in an attempt to say in song what Agee says in his writing. In that regard the song is much like a “co-write” with Agee as I use some of his lines, but halfway through the song it also becomes about Agee, as the main character in the song. In my mind this reflects his autobiographical connection to his story, which he told in the third person. I also change between first person and third person in the narration, not unlike the prologue and book proper of the original publication of A Death in the Family.

In the first verse this story is open ended in its meaning, alluding to pages turned and a dream and a childhood memory, images and ideas taken from Agee’s life and novel. The line like evening stars at noon is taken from his prose piece “Now As Awareness.” The phrase The story of the world came to me at some point, and I began to structure Agee’s images around it.

The second verse comes almost entirely from “Now As Awareness,” drawing phrases Agee uses to speak of humanity’s long run coming from its beginnings to him. Those who’ve gone before and those children of the sun and Who lived in their time as I live now in mine and like sparks upon a chimney wall are phrases from that piece.

The line in the first bridge but they can never, no not ever, tell you who you are is a variation on Agee’s lines at the end of “Knoxville: Summer 1915.”

The third verse changes from first person to third person and describes Agee at work. Drag that body into the light alludes to the main character in the restored version dragging a body through the streets of Knoxville.

The second bridge lists specific works of Agee’s, the screenplays Night of the Hunter and The African Queen, the prologue “Knoxville: Summer 1915,” and then quotes from the prologue (back to first person), We’re talking now of summer evenings.

The last verse goes back to third person and describes the walk the father and son take in Chapter 1 of the original publication of A Death in the Family.

So, I did write a song about Agee, starting in a more general way with story as the theme, a story about an individual, or the world, or all of humanity, and then becoming about James Agee specifically, describing him as an adult writer and as a child from a scene in his autobiographical book.