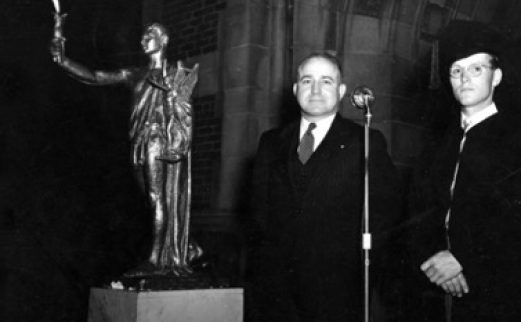 We just celebrated the Torchbearer Turning 50! If you missed the celebration, here is a bit of the interesting history of how the Torchbearer became the symbol of our shared dedication to lighting the way as Volunteers:

From Smokey, to the Volunteer, to the Power T, the University of Tennessee is no stranger to long-standing traditions. However, one symbol can be rightfully called the official symbol of the university, and that is the Volunteer statue, best known by its nickname the Torchbearer. For 50 years, the Volunteer Statue has been the proud embodiment of a UT Volunteer spirit. But have you ever wondered how we got this iconic figure leading campus by his eternal torch?

In the newly reprocesssed Volunteer Symbol Committee Papers the story of the symbol unfolds. The charge to identify a campus-unifying symbol came from UT administration and the All-Student Club in 1929. By May of 1930, students raised $1,000 prize money for prospective design of a symbol representing UT’s dedication to service.

The contest was open to student sculptors in all American and European art schools. In 1931, with more than 80 models submitted, the committee chose Theodore André Beck, a Yale School of Fine Arts student, as the winning designer.

Did you know that the original design of the sculpture changed many times before the campus approved the 1968 statue that stands proudly at the entrance to Circle Park?

The statue was surprisingly controversial from the very beginning. The 1931 winning design was met with almost immediate criticism. The original design showed a middle-aged man with a Grecian style haircut and a slight paunch frame, holding a lantern waist-high in his right hand. After student protest and much criticism, Beck visited campus and listened to their concerns. He modified his design, replacing the lamp with a torch the figure held high. In 1937, the design of the statue was changed again, at the request of the campus symbol committee, to add a globe beneath the winged goddess of victory, in the statue’s left hand, suggesting that victory over the challenges of the world, in times of both war and peace, lay in the individual’s own hands. UT adopted the Volunteer Creed, “One that beareth a torch shadoweth oneself to give light to others” to accompany the representation.

The original 1940s plans to cast a 26-foot-tall version of the statue in a plaza were thwarted by a lack of funding. Costs were estimated at $60,000, which in today’s money would be more than $1 million. Instead, the university adopted the Torchbearer as its official symbol and began using it on yearbooks, class rings, stationery, and commencement programs, along with selling five-inch tall bronze reproductions.

By the 1960s, after a few more changes to the statue design, the university began new efforts to cast the statue. Trustees devoted money to fund an area in Circle Park, but not the statue itself. The Class of 1967 raised enough funds for a nine-foot-tall Torchbearer, but art students again voiced objections. They said the statue would have bowed legs, look archaic, and appear to be directing traffic on Volunteer Boulevard. The students marched to the office of then-UT President Andy Holt and demanded that a committee of students and faculty decide whether the statue would be cast as designed. President Holt persuaded Beck to again revise his design. Beck’s final work on the statue capped the more than 30-year quest to raise the Torchbearer and was unveiled at a ceremony on April 19, 1968.

Explosion: Seems to be a touch of gas…

The statue needed modifying again in the fall of 1990.  Just days after vandals splattered the nine-foot-tall bronze statue with paint, the Volunteer statue tipped from its base and broke its outstretched arm. When removing the vandals’ paint, workers disconnected the gas lines leading to the torch. A small gas leak created a buildup of gas that lead to the explosion near the rear of the statue, tipping it over. A worker who witnessed the explosion speculated: “If the leak was directly under the base, it might have lifted off.” The statue was quickly whisked away for repairs, where a new arm and torch was cast and installed in time for homecoming.