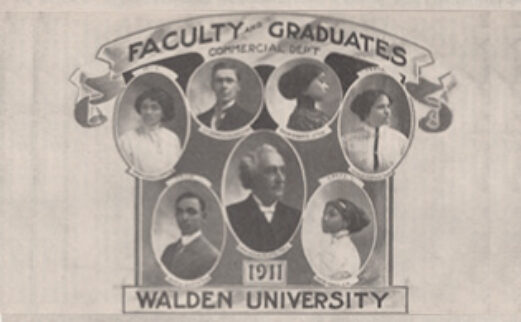 Among the little-known treasures in the Betsey B. Creekmore Special Collections and University Archives are a small number of academic catalogs from the former Walden University, a historically black college founded in Nashville, Tennessee, following the Civil War.

The Catalogues of Walden University, consisting of five catalogs published between 1900 and 1917, are available as a digital collection on the UT Libraries’ website. The catalogs feature courses of study, lists of faculty, students, and alumni, and essays on the institution’s history.

The college was founded as a school for freedmen in 1865 by missionaries of the Methodist Episcopal Church. Initially, classes taught at Nashville’s Andrew Chapel M. E. Church were offered to both adults and children. After the state established a public elementary school in Nashville in 1867, the Methodists chartered Central Tennessee College. The school purchased land on what is now First Avenue, South, and constructed two brick buildings with financial help from the Freedmen’s Bureau. Courses of study included teacher education, agriculture, science, and theology.

Central Tennessee College was the parent institution of Meharry Medical College, the first medical school in the South open to African Americans. In 1876, the Meharry Medical Department was added to Central Tennessee College. The college added courses for women, including nursing, in the 1890s. In 1915 the Meharry medical faculty decided to form a separate college. The esteemed medical college continues to this day.

The earliest of the five catalogs in the UT Libraries collection dates from 1900, the year the Central Tennessee College was renamed in honor of Methodist Bishop John Morgan Walden, who had served as a missionary to freedmen after the Civil War. At that time, Walden University had 13 departments, 68 faculty members, and 1,360 alumni.

The institution’s fortunes declined, however, after the Tennessee Agricultural and Industrial State Normal School opened in Nashville in 1912, the nation suffered a depression in 1914–1915, and the Great Northward Migration drew more African Americans to the urban North, Midwest, and West. In 1922, Walden University was renamed Walden College and moved to a new campus. The school closed in 1925 due to financial difficulties.

Notable alumni of Walden University include Noah W. Parden (class of 1891), the first African American attorney to present an oral argument before the US Supreme Court, and Emma Rochelle Wheeler (class of 1905), founder of Walden Hospital and school of nursing in Chattanooga.

When and how the UT Libraries acquired the catalogs is unknown. Today, of course, archives and special collections libraries maintain meticulous records of donated or purchased materials. But it is not unusual for any archive or special collection to hold materials of unknown provenance.

We are pleased to make these historically important catalogs available as part of the UT Libraries’ Digital Collections. The original volumes are part of our Rare Books collection and are available to researchers by appointment with the Betsey B. Creekmore Special Collections and University Archives.