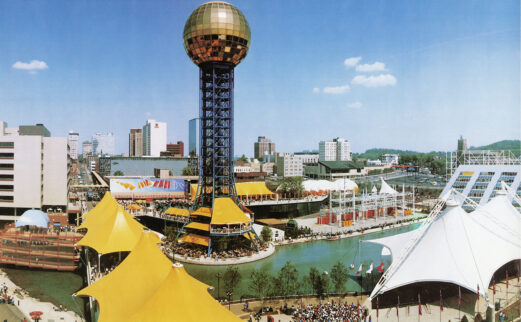 The Knoxville International Energy Exposition (better known as the World’s Fair) was held in Knoxville from May 1 to October 31, 1982. The theme was “Energy Turns the World.” By the end of the six-month fair, 11,127,786 visitors had passed through the turnstiles.

The 1982 World’s Fair is the subject of the current display in the Elaine Altman Evans Exhibit Area located on the first floor of Hodges Library. Memorabilia and images of the 1982 World’s Fair are drawn from collections in the Betsey B. Creekmore Special Collections and University Archives.

The 1982 fair was held at a site immediately adjacent to the University of Tennessee campus. More than three thousand students worked for the fair, pavilions, exhibits, or concessions. The College of Nursing operated the fair’s Wellness Station. And the College of Veterinary Medicine cared for the Budweiser Clydesdales, who performed in fair parades. Over the summer, UT housed 60,000 World’s Fair visitors in residence halls.

The United States and nineteen other nations hosted pavilions built on the site of an abandoned L&N Railroad yard, and more than 50 corporations mounted exhibits. The fair introduced new innovations such as touch-screen displays and shelf-stable milk. An arcade featured video games of the day including Pac-Man and Donkey Kong. The Sunsphere, a 266-foot steel tower topped with a five-story gold globe, became the symbol of the exposition. The new Tennessee Amphitheatre hosted country music and classical music concerts. A giant Rubic’s Cube stood outside the Hungarian Pavilion. The fair welcomed sports exhibitions; numerous symphony orchestras; and appearances by popular performers such as Willie Nelson, Loretta Lynn, and Merle Haggard. President Ronald Reagan attended the opening day ceremonies.

World’s Fair organizers were looking for ways to lure more shoppers to Knoxville’s central business district and away from the growing number of suburban shopping malls. They thought that an international exposition would leave the city with a large tract of downtown acreage that could be used for downtown redevelopment after the fair closed. [Tennessee Encyclopedia]

Hosting the World’s Fair was not without opposition. Planning began in 1976, and when the proposed site was announced, businesses and residents protested the taking of their property — holding rallies and calling for a referendum. But the prospect of the fair had captured the fancy of government, business, and large numbers of private citizens. The fair went forward, and the Knoxville International Energy Exposition gradually acquired the 67-acre fair site near downtown Knoxville. In the year leading up to the fair, landlords evicted students from apartments in the nearby Fort Sanders neighborhood in anticipation of being able to house overnight visitors to the fair.

Initially, there had been skepticism about Knoxville’s ability to host a world’s fair. (A 1980 article in the Wall Street Journal referred to Knoxville as a “scruffy little city.”) Financially, the Knoxville International Energy Exposition pretty much broke even, posting a profit of $57. But despite attracting more than 11 million visitors, the World’s Fair did not fulfill the organizers’ original vision of spurring major downtown redevelopment. Eventually, all the pavilions were demolished. Only the Sunsphere and the Tennessee Amphitheatre remain. Knoxville continues to benefit from renovations made to the L&N station, the Foundry, and the Candy Factory.

The 1982 World’s Fair 40th Anniversary Celebration will be on display through Fall 2022. The Elaine Altman Evans Exhibit Area is accessible all the hours the library is open.