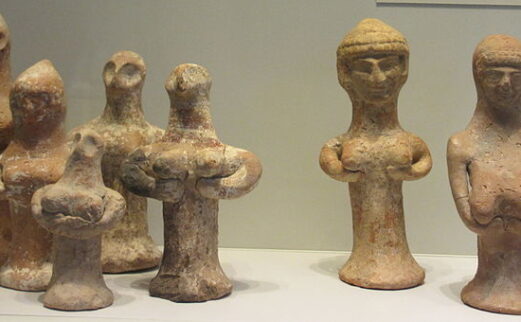 View More
For Your Reference: The Archaeology of Religion
November 15, 2021

UT faculty members Erin Darby and Theodora Kopestonsky will be our guests on the upcoming November 18 episode of For Your Reference, the UT Libraries’ original livestream series featuring conversations with guest scholars, and will be discussing archaeology and material culture.

Darby is an associate professor of Early Judaism, and Kopestonsky is a distinguished lecturer in Classics. Both study ancient material culture and the intersection of ancient artifacts and the religious lives of everyday people in the remote past.

There’s a saying that you can’t get religion or politics out of the ground. So how do scholars form conclusions about religious practices of the ancient past from artifacts uncovered at archaeological excavations?

Among the ancient Greeks, Kopestonsky explains in a recent paper, “Worship of the divine was interwoven into the very fabric of their lives. Shrines, sanctuaries, and the sacred spaces were positioned throughout the ancient landscape by roads, in caves, at springs, on mountainsides, in the city center, and at the edge of their territories. Every day in every city, sacred spaces were visible and played a part in their daily activities.”*

Local cults of minor deities such as heroes and nymphs flourished alongside worship of the major Olympian deities. The city of Corinth and the surrounding rural area were rich in freshwater springs and wells — typical sites for shrines to the nymphs, those minor female deities associated with the elements of nature. There is archaeological evidence of ritual activity at these sites, but rarely are there inscriptions that identify the deities to whom the sacred spaces were dedicated.

In “The Greek Cult of the Nymphs at Corinth,” Kopestonsky looks at surviving figurines and reliefs, the architecture of the shrines, and even the surrounding landscape — comparing them to other ancient Greek sites known to be dedicated to the nymphs — to demonstrate that the nymphs were an important and visible part of the religious lives of the ancient Corinthians.

How do scholars form conclusions about religious practices of the ancient past? Sometimes, with scant evidence — according to professor Darby’s recent study of Judean Pillar Figurines (JPFs).

Thousands of small clay figurines of females have been found at archaeological sites located in the biblical kingdom of Judah. The figures are portrayed holding up prominent breasts. A cylindrical pillar forms the bottom half of each figure — thus the name “pillar figurines.”

What ritual function did the statuettes serve? Were they cult figurines representing the goddess Asherah (whom some scholars contend was worshipped as the consort of Yahweh)? Were they used by women in household rituals addressing female concerns such as infertility? Scholars have proposed both theories. But both theories rely on insufficient evidence and a lot of assumptions.

“[M]any of the traditional interpretations are not supported by the evidence currently available,” Darby states in Interpreting Judean Pillar Figurines: Gender and Empire in Judean Apotropaic Ritual.** “Rather, interpreting JPFs (as with any ancient artifact) requires delving deeply into the full range of archaeological, textual, and iconographic data that relate to the rise of the figurines, their local adaptations, and their place in the Iron II Near East.”

Join us on November 18 for a lively discussion on the archaeology of religion.

About our guest scholars:

Erin Darby is an Associate Professor of Early Judaism in the Department of Religious Studies at the University of Tennessee, Knoxville, and the Faculty Director of Undergraduate Research and Fellowships. Erin is an active field archaeologist and an expert on ancient figurines from the Middle East. Her publications focus on female figurines from Israel/Palestine, particularly what the figurines tell us about the religious lives of everyday people. She is also a scholar of the Hebrew Bible/Old Testament, and she co-directs the ’Ayn Gharandal Archaeological Project in southern Jordan.

Theodora B. Kopestonsky is a Distinguished Lecturer in the Department of Classics at the University of Tennessee, Knoxville. She received her PhD in Classics from the University of New York at Buffalo in 2009. She has published several articles on ancient Greek ritual practice, particularly on Corinthian terracotta figurines, dedicatory traditions at shrines, and the cult of the nymphs at Corinth, as well as on pedagogy, focusing on the use of coins as artifacts and on utilizing pop music to teach Latin poetry.