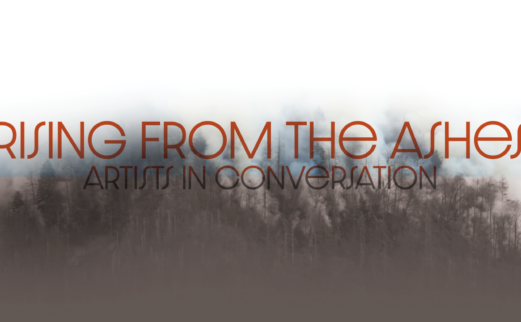 Cartoonists Paige Braddock, Marshall Ramsey, and Danny Wilson have used their skills as illustrators and artists to document the experiences of those who lived through the Chimney Tops II wildfires that swept through the Great Smoky Mountains in 2016.

Join us on Thursday, February 10, at 6:30 p.m. (EST) for a conversation with the artists. The event will be livestreamed on Facebook and YouTube.

The artists’ work was inspired by interviews with those who lived through the catastrophic wildfires. Those interviews were recorded as part of Rising from the Ashes, an oral history project of the University of Tennessee Libraries, the City of Gatlinburg, and the Anna Porter Public Library.

The February 10 Rising from the Ashes: Artist Panel Discussion is intended to promote community healing from the shattering impact of the wildfires. Fourteen people died in the tragedy, and mountain communities were devastated. The event is supported by a grant from the National Endowment for the Arts.

Paige Braddock is best known for her Eisner-nominated comic strip, Jane’s World, the first gay-themed comic work to receive online distribution by a national media syndicate in the US. Braddock concluded the comic strip after completing its 20-year run in 2018. To celebrate the groundbreaking comic’s 20th anniversary, Braddock released a special anthology with Lion Forge in August 2018, Love Letters to Jane’s World. In 2019 it was selected as a Lambda Literary finalist for best LGBTQ graphic novel. Braddock published the first novel inspired by the comic series in 2016 with Bold Strokes Books. She has also written a series of lesbian romance novels with this publisher under the pen name Missouri Vaun. Two of her novels won Golden Crown Literary Society awards in 2019.

Marshall Ramsey is the Editor-At-Large for Mississippi Today, a non-profit news website. He’s a two-time Pulitzer Finalist (2002 and 2006), and his work is nationally syndicated by Creators Syndicate. His cartoons have appeared in the New York Times, USA Today and the Jackson, Mississippi Clarion-Ledger. He is the author of several successful books including three cartoon collections, two short story collections (Fried Chicken and Wine and Chainsaws and Casseroles), and the delightful children’s book Banjo’s Dream. Ramsey’s cartoons, photos, stories, and posts are frequently shared on Facebook, Twitter, Pinterest, and Instagram. Ramsey is also the host of the weekly statewide radio program Now You’re Talking with Marshall Ramsey, and the television program Conversations on Mississippi Public Broadcasting.