Features and fragments from the University of Tennessee Libraries 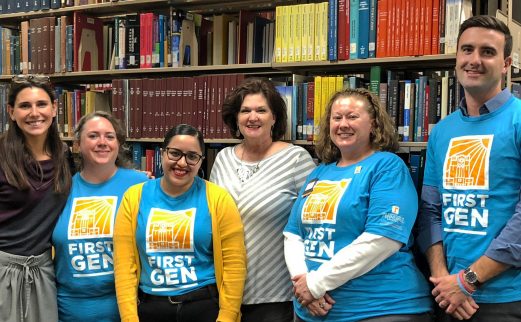 This November 8, UT holds a First-Generation College Student Celebration to acknowledge first-generation students, faculty, and staff on campus. We at the UT Libraries wish to add our congratulations to first-gen college students for facing challenges to meet the goal of graduation.

Among the UT Libraries’ faculty and staff are a number of first-generation college students. Here’s what a few of them had to say about their experiences.

I always knew that I wanted to go to college. I wanted to become a studio musician and play in an orchestra for movies, tv or video games. However, I knew that a degree in performance was less useful than a {music} education degree, should performing not pan out.

Finances were always hard without any support beyond what I could provide for myself, so I worked for the college library while going to school. I took 25 hours that first semester, but wound up dropping a class, so I finished out with 23 credit hours. I was worn out but determined. Given that music education required so many classes, I wound up taking 5.5 years to finish my degree. Thankfully, with the help of scholarships, I only had $15,000 in student loans.

After I finished my undergraduate degree, I realized how

much I didn’t really want to teach music. I love music even now, but I was not at all ready to be a teacher. Later, I started a graduate degree in Music Education and worked as a student worker in the Music Library on campus. Once I completed my Music Education Masters, I went on to get a second Master’s degree in Information Science.

I have now been working at the university for over 14 wonderful years. Every experience I’ve had, both good and bad, has led me to where I am now and made me who I am today. For that, I am grateful.

I was born into the stereotypical rural, low-income southern Appalachian family with its fair share of substance abuse, jail time, domestic violence, and extremely low life aspirations. I knew from an early age that I did not want that to be MY life for the rest of my life, and I knew that education was the only way to accomplish that. So I made sure that I studied, got good grades, stayed as far away from trouble as I could possibly get, and got into college.

During my college career I faced a slight bit of “oh, now you think you’re better than us, huh?” mentality from some family members, which was not true and kind of hurt. I just knew that I wanted a better future outlook for myself than they obviously wanted for themselves, and so I made it happen, against the odds and expectations.

It was most definitely a struggle (a 5-year struggle at that!), but I finally earned my bachelor’s degree in the spring of ‘98, and I’m SO glad that I didn’t let anything keep me from it.

Being first-generation was hard; we had to figure out a lot of things alone. Both she and I got involved with La Raza Student Association. My personal opinion was that student organizations like La Raza were one of the reasons we stayed and felt like we belonged.

She graduated in 2010 and went on to get her Ph.D. in Chicana/o and Latina/o Studies, and I graduated in 2011 and took some time off to then get my Master’s in Library and Information Science.

I obtained my undergraduate degree in anthropology while I was working in the library and serving in The Air National Guard. I was going to go into Graduate School in Anthropology, but decided to stay in the library since I was married and needed benefits.

So, I worked full time and went to graduate school in Library and Information Science one class at a time. In the meantime, my wife became pregnant and I quit graduate school and took a part-time job to pay off some bills before the baby arrived.

My oldest daughter graduated from Vanderbilt in chemical engineering in 2017, and

my youngest daughter is a Junior at the University of Tennessee majoring in creative writing and minoring in French.  Needless to say, everything that I have done in life is for my wife and family.

My parents were very supportive of my education from the time I was young.  They could not financially support my college expenses, as I was the oldest in a family of 6 children with a stay at home mom and a modest family income.  But, with both my undergraduate and graduate schooling, they never hesitated to let me know how proud they were or to encourage me to proceed with my education.

Frankly it was never a question in my mind that I would go to college, but some of that influence came from my peers as well. I also knew from the start, I would have to pay for my education on my own and that actually served to make me work harder and develop independence (and responsibility) in terms of taking care of and looking out for myself.

I lived in a small, rural Southern Illinois town, and higher education opened up the world to me and changed my life dramatically.  (One additional twist I will throw out there: I graduated in 1968. High schools encouraged girls with good academic records to pursue a college track, but they also were quick to push us toward

careers that were very female dominated such as teaching, nursing, and social work. They also never hesitated to remind female students that they needed to learn homemaking skills because the prevailing thought was that we would all be wives and mothers, eventually. Guys were directed more into higher salaried type professions, and girls were directed toward low paying service careers.)

That said, I loved my career as a librarian and educator, but I also worked my way up the ladder to a senior administrative position.

I should not be here.  I am a double first-generation student—a first-generation college graduate and a first-generation high school graduate. Neither of my parents graduated from high school or college, though they were highly self-educated—my mother was a voracious reader, and my father traveled the world courtesy of the US Army and owned several successful small businesses.

Having so little formal education themselves, my parents had very little in the way of academic advice to offer me. But they gave me something much more important—they believed in me. I never remember a time when they did not expect that I would attend college. Because of their belief and support, and help from many others along the way, I was able to find my way into and succeed in higher education.

My journey to college and later to graduate school and a career in higher education has taught me the power of simple things—a kind word, an expression of encouragement, a little advice (if asked for), can make a world of difference to a struggling student. These things made a world of difference to me, and as a result my life and the lives of my family have been made immeasurably better by the power of education.

We appreciate our UT Libraries colleagues who have shared their personal first-generation college student stories, and hope they inspire you to pursue or continue your own education.