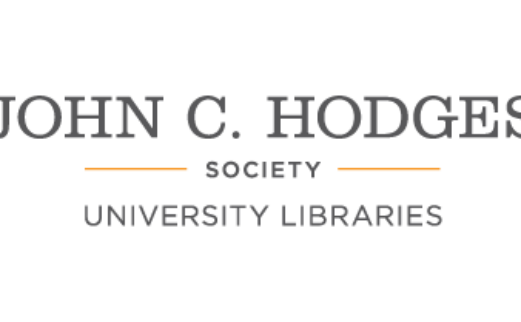 The John C. Hodges Society: Recognizing the Past, Committed to the Future
by Casey Fox
November 3, 2020  •  6 minute read

Since 2013 individuals and organizations that make a gift to the Libraries have been able to call themselves part of the Library Society of the University of Tennessee. During that time, the Society had a huge impact, including helping the Libraries not only meet but surpass its ambitious $20-million goal during the university’s recently completed Join the Journey fundraising campaign.

Join the Journey came to a close on June 30, and with the end of the campaign came an opportunity to look to the future. The Library Society currently boasts its largest membership in years, and the time is ripe to think about who we are and what we hope to accomplish.

Supporters of the University of Tennessee Libraries represent a diverse range of backgrounds and experiences, but they are united by a shared recognition of the vital role the libraries play in the Volunteer community. With this in mind, Dean Steve Smith and the Library Society Advisory Board have chosen to honor some of the greatest of these supporters by renaming the Library Society and one of its giving circles. And with new branding and presentation, the Libraries are also looking to the future and an ever larger and more engaged membership.

The Library Society has been rechristened the John C. Hodges Society of the University of Tennessee Libraries. Anyone who makes a gift to the UT Libraries becomes a member of the Hodges Society and enjoys a range of benefits, depending on the level of their gift. This new name honors John Cunyus Hodges, UT English professor, author of the famed Harbrace Handbook, and one of the UT Libraries’ earliest and staunchest advocates.

Members of the Hodges Society who contribute $25,000 or more to UT Libraries during their lifetime join the Felicia Circle. Felicia Harris Hoehne became the first African American UT Libraries faculty member when she was appointed as a reference librarian in 1969. She retired from the Libraries as a full professor in December 2013. Hoehne is fondly remembered by many members of the UT Libraries community, including DeVine Music Library Coordinator Chris Durman, who says, “I always think of librarianship as a service profession, and no one understood that better or served as a better example of great public service than Felicia.” In addition to being a trailblazer and role model at the Libraries, Hoehne is also a dedicated community volunteer who has been recognized by numerous organizations for her service in Knoxville and the state of Tennessee, including by the City of Knoxville, Knox County, the Tennessee Library Association, and the Tennessee Higher Education Commission. UT Libraries is proud to name this giving circle in her honor. [Read more about Felicia Harris Hoehne here.]

We recognize donors who have included the UT Libraries in their estate plans through bequests, charitable remainder trusts, charitable gift annuities, life insurance gifts, or retirement beneficiary designations with membership in the James D. Hoskins Legacy Circle. Hoskins taught both math and history at UT (not at the same time) and served as University President from 1934 to 1946. The James D. Hoskins Library, named in his honor in 1950, served as the main library on campus until 1987.

Hodges Society members who contribute at least $500 annually to UT Libraries become members of the Dean’s Circle. The loyalty of our Dean’s Circle members enables UT Libraries to invest strategically in our students, programs, and research.

We are grateful for all of the ways Hodges Society members choose to support UT Libraries and the community we serve. You are the true embodiment of the Volunteer Spirit and we look forward to many years of successful partnership!